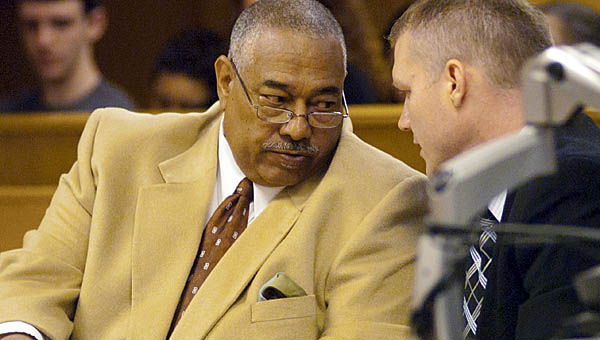 James Hale, sits with his attorney Sean Maynard, before the start of proceedings in Wayne County Circuit Court Friday afternoon.

WAYNE COUNTY, W.Va. — There are few instances in life, that while they are happening, those watching know with certainty they are defining moments.

In a unique court case Friday, Wayne County Circuit Court Judge Darrell Pratt ruled on a case that had been pending in the county since 1856, essentially redefining the family history of James Hale and his relatives, as it should have been done more than 160 years ago.

Hale, a Huntington, W.Va. resident, filed a motion recently to get an official and final ruling on the freedom status of his great-great-grandfather Harrison Polley, and two of Polley’s sisters, Anna and Louisa.

The three “Polley Paupers,” as the children were know when the case originally first went to trial in 1851, were kidnapped from their family in Lawrence County, Ohio, a free state, and taken against their will to be reentered into slavery in West Virginia.

Hale gave a complete background of the case during Friday’s trial.

According to Hale, brothers Peyton and Douglas, who were slaves, gained freedom through the will of David Polley after his death in January 1849.

Douglas then bought the freedom of Peyton’s wife, Violet, and their eight children from the late Polley’s daughter and son-in-law, Nancy and David Campbell.

Campbell was in financial troubles and sold the family for much less than they were worth, Hale said. The sale of the Polleys would also keep them from being sold at a sheriff’s auction to placate Campbell’s creditors.

After their release from the Campbells, the Polley family left by canoe and traveled to Lawrence County, where they lived as free people and farm laborers.

Four of the children, Harrison, Nelson, Anna and Louisa, were sold to a wealthy Wayne County man named William Ratcliffe.

According to Hale’s research, a lawsuit was filed in Cabell County on May 17, 1851, against Ratcliffe. When it was brought to trial, a jury decided the children should be freed.

Ratcliffe appealed the decision in the Virginia Court of Appeals, located in Lewisburg because Wayne and Cabell counties were part of Virginia at the time. The appeals court sided with Ratcliffe and overturned the Cabell County court’s decision in September 1855.

Before a petition could be made in Wayne County, one of the children, Nelson, died.

In August 1856, Harrison, Louisa and Anna filed the petition against Ratcliffe, but it was never resolved.

Hale and other descendants of the Polley children, Dr. William Polley and Henderson Fullen, read actual depositions from the original court proceedings as evidence that the children were granted freedom by their sale to Douglas Polley.

The will of David Polley was also read as evidence. He released Douglas and Peyton from servitude upon his death, it said.

Depositions of Ratcliffe, David Justice and David Campbell were also read by the defense.

In Ratcliff’s statement, the case was made that the original bill of sale of the children to Douglas Polley was fraudulent and for the purpose of defrauding creditors, because if Campbell got rid of his slaves and had no other assets, his creditors could not collect anything from his estate.

Judge Pratt agreed that the languishing case was unreasonably delayed and erroneously concluded by the Wayne County court at that time, and made a final ruling.

Based on the evidence presented, Pratt said, the kidnapping of the Polley children was unlawful and a criminal act, and the children were indeed free as of 1849.

Pratt, who had researched the case extensively before the trial, said he had heard some people say the case was a waste of time because the Emancipation Proclamation of 1863 would have freed the Polleys anyway.

“These children were free before the Civil War. Before the Emancipation Proclamation,” Pratt said. “I think it’s very important for the family to be able to say, ‘Peyton and Violet Polley did not go to the state of Ohio and procure their freedom and just forget about their kids, that were back in Virginia and back in Kentucky.’ They sought the services of some high-ranking people in the state of Ohio to try to legally obtain the freedom of their children.

Hale said after the trial he was aware the judge’s decision before hand, but was still surprised by the amount of effort Pratt put into the case.

“I knew they were preparing an order but I didn’t know exactly what it would say,” Hale said “It is amazing the amount of research that Judge Pratt put in to render his decision. I am in awe that somebody would take the time to invest this much energy in my family. It is just amazing.”

Saunders said he had known about the Polley family history from his own research as an avid local history buff. Hale and Saunders eventually met and began to share each other’s findings.

To see the conclusion of the case, Saunders said, was a great triumph for a class-act family.

“Knowing that I could help them, I really don’t know how to explain it,” Saunders said. “It was special. It was really something. … Knowing (the family) came from this case and what their ancestors endured, yet they are doctors, college professors, that’s a human triumph.”

“This is closure for us,” Hale said. “I’m just so happy it has all come to fruition and it’s all over.”

Although the case is over, Hale said his research into his family’s history is not. One of the next steps will be to track down what happened to the four kidnappers.