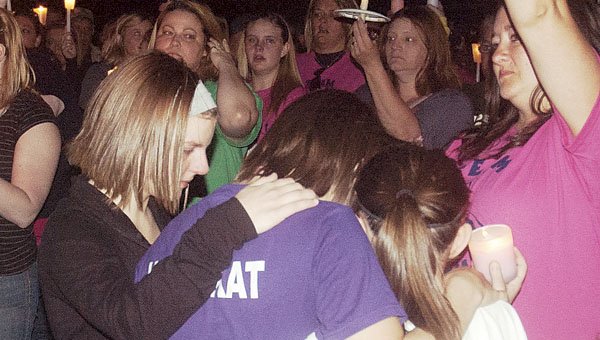 CHESAPEAKE — Chesapeake native Toni Black knew she didn’t have much time left on this Earth. She had a simple message during the last week of her life: “If I have to leave, I’ll be watching you.”

The 23-year-old, a woman whose courage and serenity in the face of massive odds galvanized a community, lost her long-fought battle with cancer. Toni Black died at St. Mary’s Medical Center in Huntington, W.Va. around noon Monday surrounded by her family.

Fittingly, a single star lit up the sky that evening during a ceremony dedicated to Toni’s memory. Friends and family felt that star signified Toni watching as they gathered in the parking lot of Chesapeake High School.

With candles illuminating the night, the group shared stories about Toni as country music played in the background. The pink “Team Toni” shirts from the recent fundraisers were scattered throughout the crowd, along with pink glow sticks.

Even though the mood was somber, Toni’s family and friends gave praise to God.

“Toni got her miracle,” Jill Greenhill, family friend, said while addressing the crowd of more than 200 people. “It’s just not the one we wanted, but don’t lose your hope and don’t lose your faith.”

Only a week ago, on April 3, thousands of people lined the roadways into Lawrence County as Black returned to her home on Bent Creek following treatment efforts and the painful news that modern medicine couldn’t stop the disease.

As fast as the “Team Toni” fundraising efforts touched the hearts of local residents, the news of her death had a greater impact.

“The family is in the Tri-State’s prayers at the moment and those prayers are needed,” Chad Greenhill said.

Toni returned home to an outpouring of cheers and emotions from her supporters on that Tuesday evening. Thousands of people wore their pink “Team Toni” shirts and displayed banners and signs for the young woman.

“There are a bunch of concerned people,” Chad Greenhill said. “We saw that with the 25,000 people that welcomed Toni home.”

The last time Lawrence County Commissioner Bill Pratt saw Black was during the parade as he read the proclamation naming the night for her.

“I leaned into the limousine and was just going to shake her hand,” Pratt said. “But she motioned for me to hug her. She was weak. She was a real caring, real energetic and real optimistic person. It is a sad day. But she showed us what we are capable of as a community. At a minute’s notice, when the cause is just, we know now what we can do.”

Handling the law enforcement escort from the 31st Street Bridge in Proctorville to her home during the parade was Sheriff Jeff Lawless.

“The community outreach was unbelievable,” Lawless said. “It shows the true spirit in our county. You wouldn’t find this kind of support in a big city. This reaches out to everyone who has cancer and brings awareness to cancer.”

The Greenhills, who own Jill’s Tumble World in Chesapeake, organized Monday night’s gathering. Chad and Jill created the “Team Toni” cause that spread through the Tri-State like wildfire.

It didn’t take long for people at Chesapeake High School, Toni’s former school, to reflect on the devastating news. Toni graduated from Chesapeake in 2007.

“I feel more relieved because I feared what the end would bring, that she might end up in a lot of pain,” said Kim Day, guidance counselor at Chesapeake High School. “It could have been a lot worse in the end than it was but it doesn’t make it any easier. She’s in a better place now.”