Redmen pull away from SP 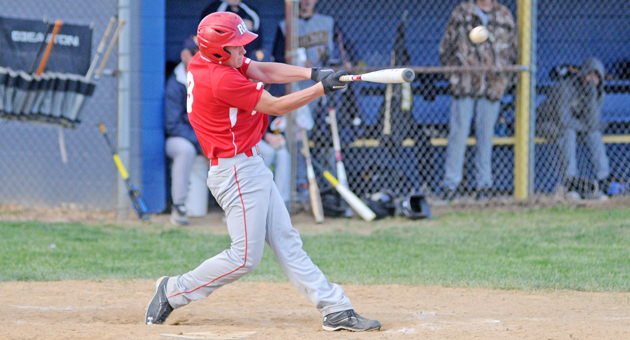 Rock Hill’s Jonah Cox connects on a pinch-hit double that keyed a 5-2 win over the South Point Pointers in an Ohio Valley Conference game on Wednesday. (The Ironton Tribune / Kent Sanborn of Southern Ohio Sports Photos)

SOUTH POINT — Johnathan Schob was good from the start, Jonah Cox made it good at the end.

Schob pitched a complete game and Cox had a go-ahead two-run double that rallied the Rock Hill Redmen to a 5-2 win over the South Point Pointers on Wednesday in an Ohio Valley Conference game.

“Schob pitched a good ball game, but offensively we didn’t put things together until the fifth inning,” said Redmen coach Barry Litteral. “Jonah Cox came off the bench and had a key hit.”

South Point took a 2-0 lead with single runs in the first and third innings.

Josh Lein singled, Austin Jeffreys put down a sacrifice and Alex Whitt singled in the first, and the second run came on singles by Whitt, Brandon Boggs and Josh Browning.

Rock Hill (8-3, 5-0) got a run in the fifth on a double by Jared Bruce and Schob’s base hit, then took the lead with three runs in the sixth.

Evan Morris had a onet-out double, Laden Delawder walked and Cox hit a pinch-hit double to score both runners. Ryan Depriest beat out an infield hit and Cox scored when home plate was left uncovered.

The Redmen got an insurance run in the seventh when Drew Kidd singled, stole second and third and scored on an errant pickoff throw.

Schob struck out 11 and did not walk a batter. Bogs struck out nine and walked five in taking the loss.

Rock Hill has 10 hits as Bruce went 2-3 while Morris and Depriest each went 2-4.

Whitt, Boggs and Browning had two hits each for the Pointers.

CINCINNATI (AP) — Joey Votto snapped out of a slump, and so did the Cincinnati Reds. Votto tied a career... read more