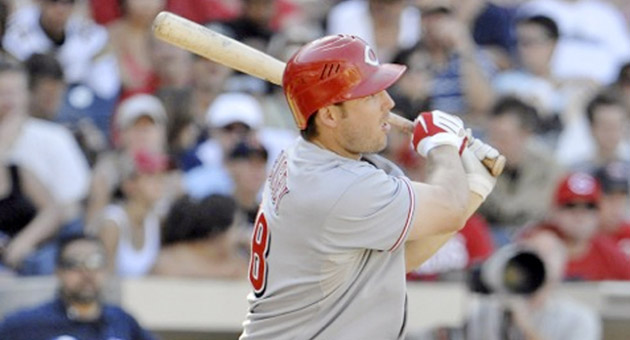 Cincinnati Reds’ outfielder Chris Heisey connects with a pitch. Heisey says the Reds are “just in a bad stretch with their offense right now.” (The Ironton Tribune / MCT Direct Photos.com)

WASHINGTON (AP) — The way Cincinnati Reds outfielder Chris Heisey sees it, there’s no way his team can keep scoring this little and losing this much.

“Could be tomorrow. Could be a couple of days from now. But we’re going to hit. We have guys on this team that can,” Heisey said. “We’re just in a bad stretch with our offense right now, and hopefully we can get it going.”

Managing only two hits during Nationals starter Edwin Jackson’s complete game, Cincinnati was beaten by Washington 4-1 Saturday. The Reds lost for the fifth time in six games — a stretch in which they’ve scored a grand total of 10 runs.

“I even asked the umpire one time, ‘Man, are we that bad or is he that good?’ And he said, ‘Hey, he was that good,”’ Cincinnati manager Dusty Baker recounted.

“Everything was moving, everything was sharp,” Baker added. “Everything looked like a fastball — and then it would be a breaking ball in the dirt. He made us look badly today.”

Other than a rocky second inning, when the Reds claimed their lone run, Jackson (1-0) was as efficient and effective as can be, striking out nine. He retired 16 consecutive batters in one stretch, until walking Heisey leading off the eighth. After a visit from pitching coach Steve McCatty, Jackson got back in gear, striking out the side. And he finished with the flourish of a 1-2-3 ninth.

As if all of that weren’t enough, Jackson even singled off Reds starter Homer Bailey (0-2).

“They’re hot right now. Their pitchers are throwing outstanding games,” Bailey said. “When you’re playing like that, things are going to go your way.”

Before an announced crowd of 35,489, Adam LaRoche contributed a tiebreaking, two-run double. Jesus Flores went 3 for 3 with an RBI while shrugging off a collision at the plate as a runner, and Jayson Werth had two hits. The NL East-leading Nationals improved to 7-2, by far their best start since moving from Montreal to Washington in 2005.

Bailey went six innings, giving up three runs and seven hits. He also walked four — two apiece in the second and third innings, when Washington did all of its scoring off him.

So far in three losses against Washington heading into Sunday’s series finale, Cincinnati has scored four runs in 32 innings.

Joey Votto, in his customary No. 3 hole, was the only Reds player in the in the same spot in the batting order Friday and Saturday. Four of the eight position players in the starting lineup changed.

But Baker said the switches were less about his team’s problems scoring and more about the short turnaround: Friday’s 13-inning loss finished after 11 p.m., and Saturday’s game started about 17 hours later.

“Not lack of offense; lack of sleep,” Baker explained.

Miguel Cairo started at third base for the Reds but left in the second inning with a strained left hamstring after doubling and coming around to score on Drew Stubbs’ RBI single. Cairo, who was replaced Saturday by Wilson Valdez, is day to day.

Before Stubbs came through, the Reds had been 1 for 18 with runners in scoring position during this series.

And after Stubbs came through, the Reds reverted to their punchless ways: The next batter, Devin Mesoraco, grounded into a double play, beginning Jackson’s string of retiring 16 batters in a row.

By JIM WALKER Tribune Sports Editor   It was one amazing run. Why not relive its great moments. Ironton fans... read more