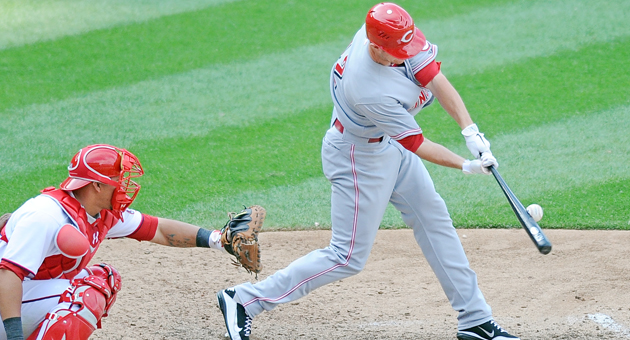 Cincinnati outfielder Drew Stubbs was one of three Reds to hit home runs in a 6-3 win over the St. Louis Cardinals on Thursday. (The Ironton Tribune / MCT Direct Photos)

ST. LOUIS (AP) — It was a day of firsts for several Cincinnati Reds hitters. And another day to forget for Adam Wainwright.

“It’s been so long since we played a game like that,” manager Dusty Baker said. “I’m just glad our offense got clicking.”

Ryan Ludwick also homered for the Reds, who had connected just once in their previous nine games and began the day with a .211 batting average.

The Reds picked on Wainwright (0-3), a 20-game winner in 2010 coming off reconstructive elbow surgery that sidelined him all of 2011.

Wainwright is winless in his first three decisions for the first time in his career. He allowed multiple home runs in consecutive starts for just the second time ever.

“His velocity is a little bit down,” Ludwick said. “I feel like we were able to take advantage of it a little bit and in that scenario, you’ve got to. When he’s on, when he gets back to 100 percent, he’s one of those guys that sometimes you’re lucky to get one run against.”

Though he said it was a “valid question” to ask whether the comeback had been a lot tougher than he had anticipated, Wainwright added, “I’m just in a funk.”

“You can say whatever you want to about surgery and all that,” he said. “My arm feels fine, I’m just not throwing great.”

Wainwright allowed four runs in five innings, leaving him with a 9.88 ERA. He thought his fastball had more life and that his curveball also was improved, but “my cutter was brutal, and that’s what both home runs were on.”

Phillips hit his first homer since Sept. 20 against the Astros, a span of 53 at-bats, and earned his first RBI in 40 at-bats. Stubbs was 3 for 5 and the homer was his first extra-base hit in 50 at-bats.

Ludwick’s two-run homer was the Reds’ second in a span of three at-bats in the fourth. Stubbs hit his first off Victor Marte in the seventh.

Matt Holliday’s three-run homer in the sixth was the only damage against Arroyo (1-0), who struck out five and walked none while scattering five hits. Arroyo threw just 90 pitches.

“He doesn’t throw any fastballs on fastball counts,” Holliday said. “He mixes it up, slow, slow and slower, and then he’ll sneak his fastball in there. He had us off-balance.”

Joey Votto added an RBI single in the Reds ninth off Fernando Salas. Sean Marshall struck out the side after allowing a leadoff hit in the ninth for his second save in second chances.

Cardinals center fielder Jon Jay left after the seventh with a sprained right shoulder after bumping into the wall trying to snare Stubbs’ homer. Jay said X-rays showed no significant damage and said he was day to day.

“I was about to make my jump and just miscalculated my steps,” Jay said. “It’s not too bad. Tomorrow is going to be a bigger day.”

“If you can’t run, you can’t play,” Berkman said after the game. “It’s not really that tough of a decision.”

Phillips got his RBI with one out in the third, Jay Bruce followed with a single and Ludwick hit the next pitch beyond the visitor’s bullpen.

Arroyo allowed two hits the first five innings, but the Cardinals opened the sixth with three straight hits. Rafael Furcal and Jay singled before Holliday, who had been 3 for 26 on the homestand, hit his third homer to cut the deficit to 4-3.

The NL Central-leading Cardinals are 9-4. A sweep over the Reds would have given the franchise its best start to the season since it was 13-3 in 1982, a World Series title year.

NOTES: The Reds are 3-21-2 in 26 series in St. Louis since the start of 2003. … RHP Homer Bailey (0-2, 5.40) starts for the Reds in the opener of a three-game series at Chicago on Friday. St. Louis’ Lance Lynn (2-0, 1.50) makes his fifth career start at Pittsburgh. … Wainwright previous allowed homers in consecutive starts May 5 and 10, 2009, surrendering two each against the Phillies at home and at Cincinnati. … Marshall has seven strikeouts in 4 1-3 innings. … Rafael Furcal had two hits for the Cardinals and is 6 for 10 the last two games.

By JIM WALKER Tribune Sports Editor   COAL GROVE — It was a performance that would have pleased John Jones.... read more