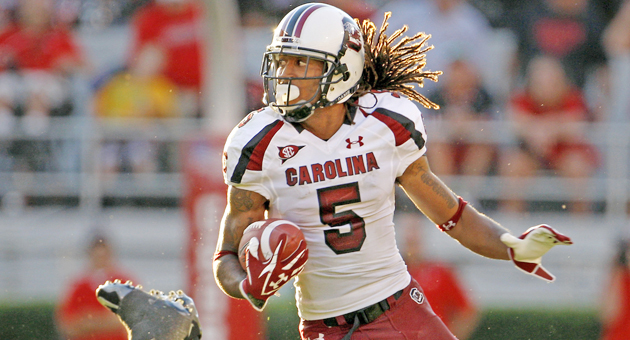 South Carolina cornerback Stephon Gilmore (5) could be a target for the Cincinnati Bengals in this week’s NFL draft. (The Ironton Tribune / MCT Direct Photos)

CINCINNATI (AP) — Andy Dalton will be curious to see where the college quarterbacks land in the NFL draft this week, bringing back memories of how he went through the process a year ago before landing in Cincinnati in the second round.

The receivers? Now, there’s a position that’s really got his attention.

The Bengals still need help at receiver as they head into a draft that gives them a lot of options. They have two picks in the first round on Thursday — the 17th and 21st overall — and three in the fifth round on Saturday. There are other holes to fill — they could use an offensive guard and a cornerback, and might be in the market for a running back — but none stands out more starkly than getting someone to catch the ball.

Dalton and A.J. Green led the Bengals to the playoffs as rookies last season and made the Pro Bowl, but know they need help to pull off a postseason encore. There’s no other wide receiver on the roster who can take the pressure off Green.

There are some available in the draft, though.

“Hah-hah, I think there’s a couple of guys out there that are pretty good,” Dalton said. “But, we’ll see.”

The Bengals (9-8) reached the playoffs last season for only the third time since 1990, getting a wild card that was partly a product of their favorable schedule. They lost to Houston in the opening round, leaving them 0-3 in the postseason since 1990. The emergency of Green and Dalton gave them something to build around.

They got the extra first-round pick as part of the deal that sent quarterback Carson Palmer to Oakland during the season, a trade that didn’t help the Raiders as much as they would have liked. Now, the Bengals get to cash in.

The question is how they go about it.

They could start up front with the offensive line. Nate Livings, who started at left guard each of the last two seasons, went to Dallas as a free agent. Right guard Bobbie Williams broke his right ankle in December. Williams is an unrestricted free agent and turns 36 in September. The Bengals signed free agent guards Travelle Wharton from Carolina and Jacob Bell from St. Louis, but both are in their 30s.

They also need a cornerback. Leon Hall is recovering from a torn Achilles tendon. Nate Clements turns 33 during the season. The Bengals signed Terence Newman, who struggled in coverage with Dallas last season and turns 34 during the season.

The running back position opened when the Bengals allowed Cedric Benson to leave as a free agent. They signed BenJarvus Green-Ellis from New England, but could draft a running back to add to the competition for the starting job. Dalton isn’t sure how the offense will change if Green-Ellis gets most of the plays.

“We’ll have to see,” Dalton said. “Obviously I haven’t seen him play that much. I don’t know much about him but once we get these practices and get rolling, we’ll see what he’s able to do.”

Another running back would be nice. They really need a receiver.

Green emerged as one of the NFL’s most dangerous receivers as a rookie, catching 65 passes for 1,057 yards with seven touchdowns in the regular season. Jerome Simpson was second among Bengals receivers with 50 catches for 725 yards, but he’s an unrestricted free agent who pleaded to a drug-related charge in the offseason. Andre Caldwell, who finished third among Bengals receivers with 37 catches for 317 yards, left for Denver as a free agent.

“Obviously if we can get another weapon, that would be great,” Dalton said. “I’m all for it. But we’ll see what happens. The draft’s crazy. Everybody knows that.”

The Bengals haven’t ruled out re-signing Simpson, who faces a four-game suspension from the league. In any case, they need to get at least one more receiver somehow.

With all the extra picks, the Bengals could be feeling better about themselves by the end of the weekend — if they do it right.

By JIM WALKER Tribune Sports Editor   COAL GROVE — The race isn’t completely over, but it is sitting on... read more