Latos gets first win with Reds 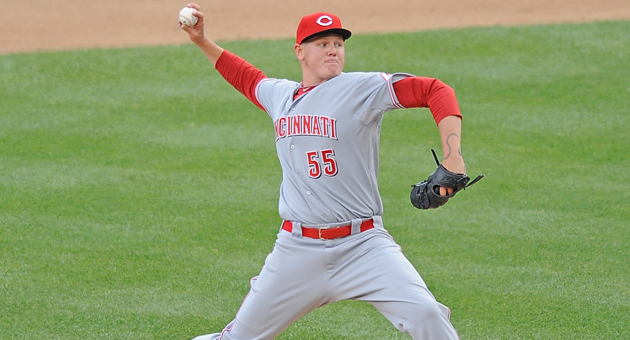 Cincinnati Reds’ pitcher Mat Latos picked up his first victory with the team by beating the San Francisco Giants 9-2 on Tuesday. Latos came to the Reds this year in a trade with San Diego. (The Ironton Tribune / MCT Direct Photos)

CINCINNATI (AP) — Mat Latos finally got his first win for Cincinnati after putting his price tag out of mind.

The right-hander pitched seven shutout innings against an old NL West nemesis, and Brandon Phillips homered and drove in three runs Tuesday night, leading the Reds to a 9-2 victory over the San Francisco Giants.

Latos (1-2) came to the Reds in a four-player deal with San Diego that included starter Edinson Volquez and two prospects who were first-round draft picks. He found himself trying to pitch up to that high price in his first three outings.

He was back on his game against the Giants, allowing only four singles.

“It’s good to get him that first win, big-time,” manager Dusty Baker said. “He told me after his last start, ‘Skip, that won’t happen again.’ He’s a man of his word.”

Latos pitched out of the Giants’ only big threat, getting Nate Schierholtz to ground into a forceout after the Giants loaded the bases on a single and two walks with two outs.

“He pitched like he’s capable,” Phillips said. “It’s all about getting comfortable. He looked very good. I was very proud of him.”

Phillips hit a two-run homer in the first inning off Matt Cain (1-1) after being called out on a foul tip. The umpires decided the tipped ball hit the dirt, giving him another swing.

The Giants have lost six straight and 11 of 15 at Great American Ball Park.

Pablo Sandoval singled in his final at-bat, leaving him with a hit in each of the Giants’ 17 games. It’s the second-longest hitting streak to open a season in franchise history, one behind Johnny Rucker of the 1945 New York Giants.

Buster Posey hit a two-run homer in the ninth after Cincinnati’s Sam LeCure threw a pitch inside, drawing a warning to both benches. Cincinnati’s Joey Votto was hit in the seventh.

Cain was in one of the best stretches of his career when he loosened up on a cool, breezy evening in Cincinnati. The right-hander had thrown 18 shutout innings in his last two starts, two innings shy of his career best. In those two starts, only four runners reached base.

A foul tip led to the end of his scoreless streak.

Drew Stubbs doubled in the first inning. Phillips worked the count to 2-2, then tipped a pitch that Posey caught by the dirt. Plate umpire Vic Carapazza called Phillips out, but first base umpire Gerry Davis indicated that the foul tip hit the ground before reaching the catcher’s mitt.

Given the reprieve, Phillips homered to center on the next pitch.

Instead of having a quick, scoreless inning, Cain wound up throwing 38 pitches in the first. He got into a rhythm after that inning. Ryan Ludwick hit a solo homer off him in the seventh, when the Reds batted around for six runs.

Jay Bruce and Scott Rolen each had two-run doubles in the seventh off Dan Otero.

Latos’ win was his latest notable moment against the Giants. After San Francisco eliminated San Diego from contention in 2010, he signed three baseballs with “I Hate SF!” in the offseason as part of a fundraiser for major league players’ alumni association, insisting it was in good humor.

NOTES: Giants 1B Aubrey Huff missed his third game while attending to a family emergency. Manager Bruce Bochy wasn’t sure after the game when he will rejoin the club. … Kentucky coach John Calipari threw a ceremonial pitch before the game. The Reds honored the Wildcats’ national basketball championship. … An estimated 660 dogs were among the crowd of 19,051 as part of a pet promotion. … LHP Barry Zito starts for the Giants on Wednesday. He’s 0-2 in five career starts at Great American Ball Park with a 7.20 ERA. … RHP Bronson Arroyo goes for the Reds. He has allowed a total of three runs in 15 1-3 innings over his last two starts.

By JIM WALKER Tribune Sports Editor   SOUTH POINT — Steve Easterling may want to audition for a role in... read more