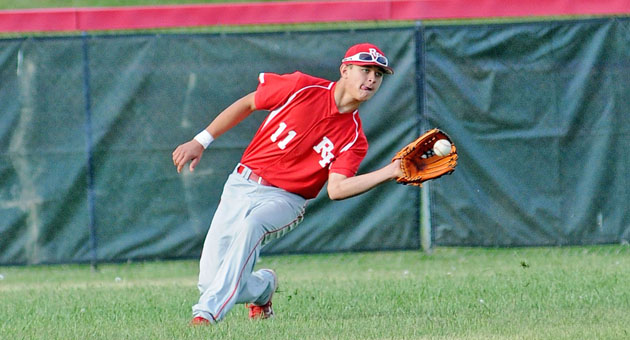 The Redmen — who won their 14th straight — beat the South Point Pointers 11-1 in five innings on Friday to finish unbeaten in 10 league games.

“They wanted to finish the season 10-0 in the league and they did,” said Rock Hill coach Barry Litteral.

“South Point came out playing well and it was a good ballgame. We just put a lot of runs on the boards and took control of the game.”

Jared Bruce got the win as he struck out five, walked two and gave up only three hits.

Laden Delawder and Matt Jenkins each went 2-2 and Drew Kidd and Evan Morris 2-3 as the Redmen had 10 hits.

“Jared threw a nice ballgame. He threw strikes for the most part and made them put it in play and we went on pitching and defense again. And we hit the ball,” said Litteral.

Rock Hill (15-3) got a run in the first inning when Morris singled, moved up on a ground out and Jenkins singled.

Jack Goodwin, Delawder and Morris walked in the second and Kidd had a two-run single.

Four runs scored in the third when Jenkins singled, Ryan Depriest reached on an error, Goodwin walked and then Jonah Cox and Delawder each had two-run doubles.

The lead went to 10-0 in the fourth when Kidd was hit by a pitch, Johnathan Schob and Jenkins walked, Ryan Depriest grounded out and Goodwin singled.

South Point scored in the top of the fifth when Patrick Jones walked, moved up on a ground out and scored on a pair of wild pitches.

But the Redmen needed just two batters to end the game in the bottom of the inning as Morris singled, stole second and came home on Kidd’s double.

By JIM WALKER Tribune Sports Editor   The Ironton Fighting Tigers’ offense was like a time bomb on Friday. It... read more