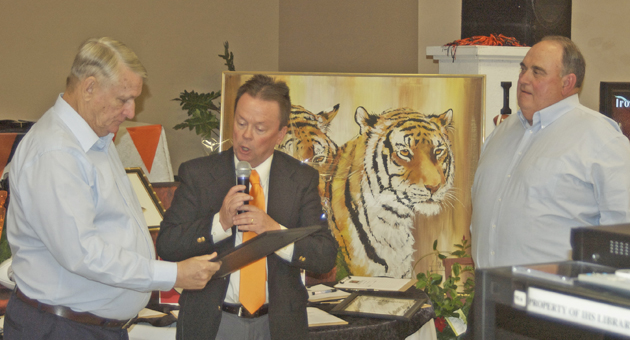 In Ironton, this is what dinner and a movie really means.

A retirement dinner for former head coach Bob Lutz and long-time assistant Mike Burcham was held Saturday night at the Knights of Columbus and, naturally, it included a video about football.

The video highlighted the 39-year run for the Ironton Fighting Tigers with Lutz at the helm that set records, won championships and established itself as one of the elite high school football programs in the state of Ohio.

Burcham told the crowd he and Lutz would now sit back and enjoy the game with the fans.

“What’s better than drinking a beer and sitting around watching Ironton football?” said Burcham with a grin.

Lutz — who retires as the winningest coach in Ohio high school football history with a 381-91-5 record — has always preached “be humble in victory, gracious in defeat.” He was nothing but humble with all the adulation thrown in his direction.

“It’s been the contributions of all the people of this town who love football. I’ve been fortunate to have good players and to have good coaches both at Ironton and St. Joe. I’ve had Mike and his leadership and support. It’s been a fun ride,” said Lutz.

New Ironton football coach Mark Vass — who has played and coached at Ironton — understands the big shoes he must fill but said he feels prepared because of Lutz and Burcham.

“After watching this (highlight) video, it didn’t make me feel any better,” said Vass who is Burcham’s nephew and grew up around his household. “But I couldn’t have asked for two better mentors. They’ve taught me a lot.”

The video included interviews with various people from the community and sports figures. One segment included the late, great Jim “Bear” Mains who talked about the massive amount of pleasure he enjoyed watching Ironton football.

“I wish it would never end,” said Mains.

Although this era has ended, Burcham said Ironton football would continue because of the character of the people in the town and in the program. He said Ironton understands what it takes to win and the players are willing to do what is necessary to win.

Burcham said he and Lutz had plenty of stories to tell about the players from the past five decades and offered an invitation to anyone to visit him and hear the information.

He then assessed his 47 years at Ironton in six words.

“It’s been fun watching you guys,” he said.

The feeling is mutual.