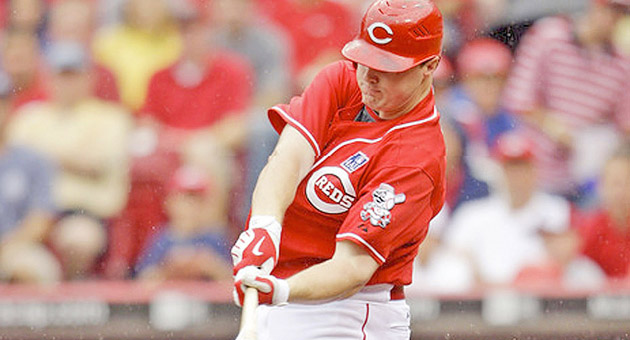 CINCINNATI — Jay Bruce, the National League’s player of the week, had to sit and watch for another day — this time, because of raindrops. His manager hopes he doesn’t cool off.

The opener of a series between the Chicago Cubs and Cincinnati Reds was postponed on Tuesday because several lines of thunderstorms moved through the area. The game wasn’t immediately rescheduled.

It meant that Bruce, who is one homer shy of matching a Reds record, had to limit himself to batting practice instead of trying to hit one out for the fifth game in a row — something he wouldn’t mind taking a swing at.

“Uh, sure, why not?” Bruce said. “But I’m not trying to think about any of that kind of stuff. It’s great. I’d like to extend this week for as long as I can and be consistent, really.”

The rainout was more beneficial to the Cubs, who arrived in town early Tuesday after a 6-4 loss in Philadelphia. The unexpected day off gave their bullpen a chance to regroup and get a little healthier. Manager Dale Sveum said after the postponement that reliever Scott Maine became sick again and wouldn’t have been available to pitch.

“So we would have been a little bit short,” Sveum said.

It was the first postponement for both teams this season and the sixth overall at Great American Ball Park, which opened in 2003. A storm moved in during batting practice, followed by another line of storms. The game was called 2 hours, 13 minutes after the originally scheduled start, with more rain expected.

The NL Central rivals are scheduled to play a night game on Wednesday and a day game on Thursday that completes the series. They have one more series in Cincinnati from Aug. 17-19, when they would likely make up the rained-out game.

The Reds decided to keep their rotation on turn, pushing everyone back one day. Cincinnati’s Bronson Arroyo will start on Wednesday against Jeff Samardzija. Chicago made one change in its pitching plans, moving left-hander Paul Maholm back from Wednesday to Friday against the Dodgers.

Chicago’s biggest problem during an 8-15 April was its lack of offense. The Cubs are last in the majors with only nine homers, five of them by Bryan LaHair. Alfonso Soriano batted .237 with no homers and two doubles in April.

Told that Soriano was hopeful he’d start hitting once the calendar changed, Sveum said, “The calendar?”

He wasn’t thinking about the monthly calendar, but the 2012 calendar.

“I’ve got to find another job then,” Sveum said, laughing.

The Reds also struggled to hit in April, but have started to find their stride lately. Bruce has led the way, going 10 for 21 in six games last week with four homers. He has homered in four consecutive games, one shy of the club record shared by Ted Kluszewski, Johnny Bench, Ken Griffey Jr. and Adam Dunn.

The Reds were off on Monday, when Bruce was chosen as the NL’s player of the week. He got another day of rest because of the rain.

Bruce had career highs with 32 homers and 97 RBIs last season. He was the NL’s player of the month in May last year, when he batted .342 with 12 homers and 33 RBIs. He’s known for staying hot for several weeks at a time, then going into a deep slump.

“I’ve had this before,” Bruce said. “It’s not this (type) of week that’s the problem. If I have a problem, it’s the other weeks. I’m just trying to minimize that.”

Manager Dusty Baker pointed out that the Cubs are likely to pitch Bruce carefully during their series.

“Sometimes a player who’s hot tends to cool off the next series because of how you pitch ‘em,” Baker said.

NOTES: Baker said INF Miguel Cairo, on the disabled list since April 17 with a strained left hamstring, is expected to start a minor league rehab assignment this week. … The rainout means Reds RHP Homer Bailey will wind up pitching on his 26th birthday Thursday. Bailey has allowed only three earned runs in his last two starts, covering 13 1-3 innings. … The Cubs expect to activate RHP Ryan Dempster off the DL to start Thursday’s game. Dempster has been sidelined by a strained right thigh. … The Reds won’t have to face Maholm, who beat them 6-1 on April 21 at Wrigley Field and has won his last two starts.