PROCTORVILLE — The family of a missing Proctorville man plans to distribute flyers in the hopes of locating him or discovering any information about his disappearance.

Alan Lawson, 41, was reported missing by his wife Monday to the Lawrence County Sheriff’s Office. He was last seen by her Saturday around 11 a.m. when he left their home to check on rental property he owns in Ironton. 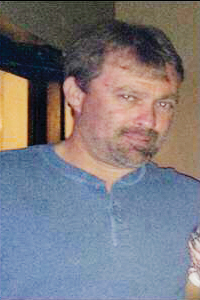 Alan Lawson, 41, was reported missing by his wife Monday to the Lawrence County Sheriff’s Office.

Now Lawson and her family have made up flyers with a photograph of the man and a description of his physical appearance. According to the flyer, the man was last seen in Ironton around 1:30 p.m. Saturday.

Information about Lawson and the car he was driving, a blue 1999 Ford Taurus, was entered into the National Crime Information Center database.

“If anyone were to pull him over and see the vehicle and license plate,” Sheriff’s Detective Aaron Bollinger said.

The sheriff’s office is also searching records in an attempt to locate the man.

Paula Lawson said that her husband had made an appointment to meet a prospective buyer in South Point to look at a car that he owns.

The buyer and Lawson were to meet at the parking lot of the South Point Food Fair but Lawson did not show up, the buyer told his wife. Calls made to Lawson’s cell phone have not been answered and the voice mail states that it can’t take any more messages.

Lawson is 6 feet tall, weighing 185 pounds and was wearing a gray sweatshirt, blue jeans and grayish white tennis shoes at the time of his disappearance.

Besides property in Lawrence County, Lawson also owns houses in Greenup County and Ashland, Ky. Family have gone to those locations to see if they could find any leads, but did not.

Lawson’s family is asking anyone with information about the disappearance to contact the sheriff’s office at 532-3106.

A small advertisement in The Tribune started it all. Pati Payne had just moved to Ironton and wanted to drum... read more