Bridge of the Future 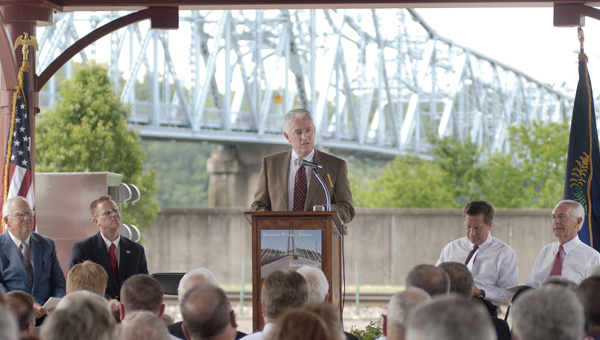 Building a new bridge across the Ohio River may have been a long time coming, but when the dirt was flung into the air Thursday at Depot Square, history was made and the future took shape.

It was a momentous day for both the cities of Ironton and Russell, Ky.

Against the backdrop of the existing bridge, hundreds of citizens and dozens of elected officials from both sides of the river gathered to celebrate the largest ODOT construction project — more than $80 million — ever awarded in Lawrence County.

“I’m thrilled we are going to do this bridge down here,” said Gov. Kasich. “It’s been neglected for too long.”

“The fact is, in our country, private life, including private enterprise, depends on a publicly provided infrastructure,” Wray said. “It’s not optional, and it’s not inexpensive. Bridges don’t get better with age. … They take constant maintenance, preservation and rehabilitation. Eventually they have to be replaced.”

In 1999, a design process began to replace the current bridge, which was built in 1922, Wray said. When ODOT was ready to award a contract, bids came in more than $20 million over estimates. Plans for the new bridge were tabled, redesigns moved slowly and the project hit other snags tied to funding and the economy.

Wray said he was always aware of the concerns surrounding the current bridge, but Mayor Blankenship’s visit to Columbus last year was a big influence on moving the bridge project forward again.

“Your mayor came to Columbus and he was determined, persistent and passionate,” Wray told the crowd to a ringing applause. “There was a lot of passion about getting this bridge completed.”

Blankenship addressed the crowd, saying the impact of the new bridge would be bigger than the cities and towns it connects.

“We have always relied on one another, since the earliest settlers, to the businesses, jobs and families we share today,” Blankenship said. “This bridge, this link between Ohio and Kentucky, it is truly an example of the partnership we share in our progress and prosperity and in our economy and our way of life.”

Construction began in early March and the banks on both sides of the river have already been cleared. Drilling shafts on the Kentucky side and laying the foundations for support piers on the Ohio side have also been completed.

There is a four-year window for total completion, with an interim completion slated for fall 2015.

The new bridge will be located between Second and Jefferson streets in downtown Ironton and near the U.S. 23 viaduct south of Russell, Ky.

Governors Kasich and Beshear recognized that a new Ironton-Russell Bridge is vital to the area and an important representation of how politicians can work together.

“What we’re doing today is an excellent example of what political leaders all across this country ought to be doing,” Beshear said. “Democrats, Republicans and Independents ought to be coming together and putting politics aside and doing what’s best for the people of our states. … The more we work together, the more you’re going to see your quality of life improve.”

Kasich assured the crowd that southern Ohio has not been forgotten by leaders.

“I know for a long time, you have felt neglected and ignored,” he said. “And I think you have assets and capabilities here that need to be taken advantage of.

According to Kasich, the new Ironton-Russell Bridge will not be the only project to link both Ohio and Kentucky.

“(Beshear) and I are going to work together on a lot of projects that are going to connect our two states,” Kasich said. “It’s really important that we have good neighbors and good relationships.”