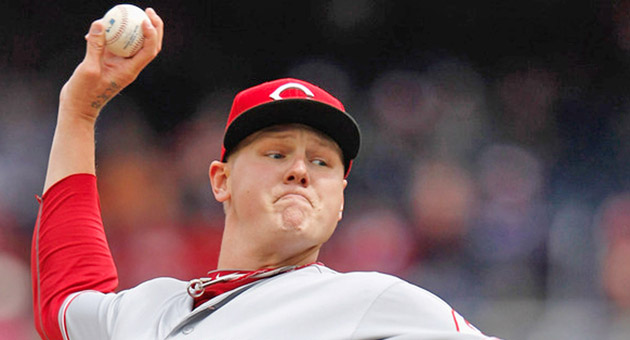 Cincinnati Reds’ pitcher Mat Latos struck out 11 batters in six innings and Reds’ pitchers combined for 17 strikeouts in a 5-0 win over the Pittsburgh Pirates on Sunday. (The Ironton Tribune / MCT Direct Photos)

All the Cincinnati right-hander really needed was a little bit of defensive help and an overpowering fastball.

Feeling lightheaded and chugging Gatorade, Latos fought off the bug and a shaky first inning to strike out a career-high 11 and lead the Reds to a 5-0 victory over the Pittsburgh Pirates on Sunday.

“You settle down, you’re concentrating, you try not to overthrow because you don’t have the strength to do so.”

Baker joked that he kept calling Latos “Michael Jordan” in the dugout between innings and Latos kept reassuring his manager he was OK.

Latos (2-2) certainly appeared to be fine while giving up two hits over six innings. So did the three relievers who upped Cincinnati’s strikeout total to 17, tying a club record for a nine-inning game.

The biggest of the 17 whiffs came in the first as Latos tightroped out of a bases-loaded, one-out jam. Third baseman Todd Frazier got the first out with a spectacular diving grab on a liner by Casey McGehee, a smash hit so hard Latos started looking in left field for the ball only to see Frazier lift up his glove.

“Luckily I got it in the glove,” Frazier said. “It almost snuck out at the end. I was holding it up there, trying to let him know. I knew Matty would do his thing. Whatever you can do to help is great, and he can help himself.”

Latos then caught Nate McLouth looking with a 94 mph fastball to escape. The Pirates didn’t get a runner to third during Latos’ final five innings.

“We had a chance to take the game in a different direction in the first inning and we did not,” Pittsburgh manager Clint Hurdle said.

Drew Stubbs had three hits, including a two-run homer, and scored three times for the Reds. Frazier added his first home run of the season as Cincinnati continued its strong play in series finales. The Reds are 8-1 on getaway days, including 5-0 on Sundays.

Charlie Morton (1-3) struggled to keep his sinker down and gave up five runs, four earned, on seven hits in six innings. He struck out five and walked two.

It was a far cry from the dominance Morton showed against the Reds last year, when he shut them out twice. He’s still finding his way after offseason hip surgery and admitted he appears to have lost a feel for his signature pitch.

“I’m not saying I’m in overhaul, but I’ve got to tweak something to get my bread and butter back,” Morton said. “That sinker is what I am.”

Latos is more of a fireballer, though he’s struggled this spring after being acquired in an offseason trade with San Diego. The 24-year-old dropped his first two decisions before bouncing back to pitch seven shutout innings against San Francisco on April 24, only to slip against the light-hitting Astros last week, giving up a career-worst 10 hits.

Command has been an issue, and so has the lack of a strikeout pitch for one of baseball’s top young arms. Latos came in with 18 strikeouts in 28 2-3 innings. It took one game to get his groove back.

Latos struck out four straight at one point, and his only mistakes over his final five innings were a pair of harmless singles.

“He told me (after the game) that he wasn’t feeling good,” Frazier said. “It didn’t look like it on the mound. Good for him. Hopefully he feels like that every time he pitches.”

Pittsburgh rode stellar pitching and defense to scratch out a taut 3-2 victory on Saturday but had issues in both departments less than 24 hours later. The Pirates committed a pair of errors — including a botched pickoff attempt by Morton that led to the game’s first run — and left nine runners on base.

Morton couldn’t get his trademark sinker to sink and the Reds took full advantage. Frazier drilled a shot into the bleachers in the second for his first home run since Sept. 2, and Stubbs pushed Cincinnati’s lead to 4-0 in the fourth when his fly ball sailed just over the wall in right-center.

Hurdle asked for a review but the call was upheld.

Staked to a sizable lead, Latos worked quickly. Relying heavily on a fastball that consistently clocked in the mid-90s, he rolled along and capped his day by getting Clint Barmes to miss badly at a slider to end the sixth.

NOTES: Pittsburgh All-Star center fielder Andrew McCutchen was given the day off. McCutchen is battling the flu and Hurdle said: “He’s not in a good place physically.” … Latos’ previous career best was 10 strikeouts, which he did three times. … The Reds begin a three-game series in Milwaukee on Monday. Bronson Arroyo (1-1, 3.03 ERA) starts against Yovani Gallardo (1-3, 5.79). Pittsburgh is off Monday and continues a nine-game homestand Tuesday against Washington. A.J. Burnett (1-2, 8.04 ERA) starts for the Pirates against Edwin Jackson (1-1, 3.69). … Cincinnati infielder Miguel Cairo went 0 for 4 in a rehab appearance with Class-A Dayton on Saturday. His return from a strained left hamstring is still uncertain.

Lady Fighting Tigers use offense to pick up pair of wins