Making the wheels go ‘round and ‘round 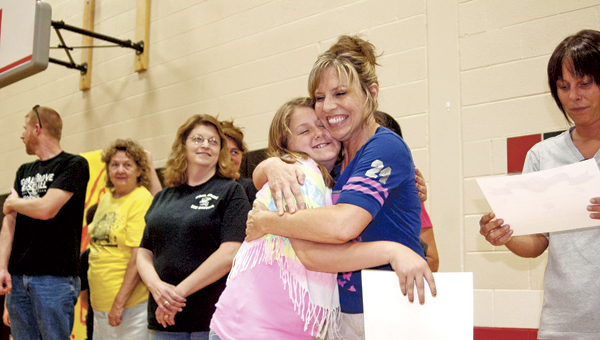 Fifth-grader Emily Spears presents her bus driver with a certificate and a hug at a special Bus Driver Appreciation Day assembly at Dawson-Bryant Elementary School.

DEERING — Not the most glamorous of jobs, driving a yellow school bus can be an anonymous and thankless job.

This week, the school bus drivers in the Dawson-Bryant Local School District got the rock star treatment when the entire elementary school thanked them for their dedication to safety and their service in a special assembly Monday.

In honor of Bus Driver Appreciation Day, each driver entered the school’s gym to thunderous applause and boisterous cheers.

Fifth grade students held up signs that read, “We love our bus drivers,” and “Thank You.” The grade also led the school in a chorus of “The Wheels on the Bus.”

“We want to thank our bus drivers,” said principal Angie Dillow. “… I don’t think we tell them enough how much we do appreciate them.”

Each bus driver was presented with a certificate, and sometimes a hug, from a student.

Potter has been a bus driver for the district for nine years. Fifth-grader Emily Spears presented Potter with her certificate.

“(Spears) has been on there since I started driving,” Potter said.

Potter said she and Spears have developed a close relationship since Spears is the last stop her bus makes in the evenings.

“We love our kids,” said Penny Corvin, driver for 25 years.

Corvin said the special recognition from the students makes her years of service all worthwhile.

Newman said the district doesn’t have substitute drivers, but all the drivers pull together to cover all the routes. He also said they go above and beyond the call of duty, are dedicated and never complain.

“They love these kids,” Newman said. “They care about these people they are transporting.”

The district will also celebrate its drivers with a special breakfast on Wednesday.

School officials say the district’s bus drivers have a total of 184 years of service.

CHESAPEAKE — In a 2-1 vote the Chesapeake Board of Education has removed the weighted grade from an elective... read more