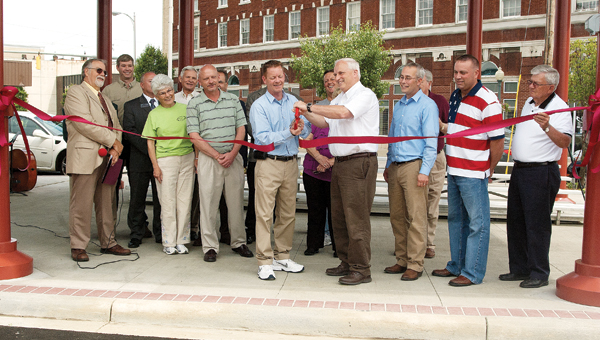 Five-year-old Tresa Schwartz, of South Point, got her very own cup of flowers Saturday. With a little help from Mom, she put in just the right amount of potting soil to make a picture-perfect arrangement. Not far away, Evelynne Gallion took her chance at a giant inflatable slide.

“She’s in head start at the (Lawrence County) Early Childhood Development Center and we found out through them this was taking place,” her grandmother, Cathie Gallion, of Ironton, said. “I think this is great. And it’s a diversion for her on a Saturday.”

And that was the point — well, one of them actually— to Saturday’s event near the corner of South Second Street and Bobby Bare Boulevard. Area leaders gathered to officially dedicate the newly completed Depot Square project and the recently opened Transit Center. They also unveiled the name for the sprayground waterpark on South Second Street and hosted a community-wide family celebration.

Ralph Kline, assistant director of the Ironton-Lawrence County Community Action Organization, said the completion of the transit center and farmers market, which had been years in the making, is one more step in the on going process of revitalizing Ironton’s downtown.

“In the 1980s we started looking at how we could transform the city. The big challenge was getting people downtown to support businesses. We began with trees and sidewalks. Over the years we gradually began to see infrastructure put together.”

Kline pointed out that much of the $1.3 million development was for things people could not see, such as underground utilities, but above ground the end result are facilities that make the downtown more attractive and that people are already using.

Kline read a proclamation from Gov. John Kasich and Lt. Gov. Mary Taylor recognizing the completion of the projects and congratulating the community for the years of work that has now a tangible outcome.

Members of the Friends of Ironton unveiled a painting of an archway that is being added to the nearby sprayground. The arch bears the words “Friends Park,” which is the waterpark’s new name.

Along Second Street between the Friends Park and Bobby Bare Boulevard, various clubs and organizations had information tables set up. Ironton In Bloom sold plants and hanging baskets. The proceeds go to the organization’s beautification effort.