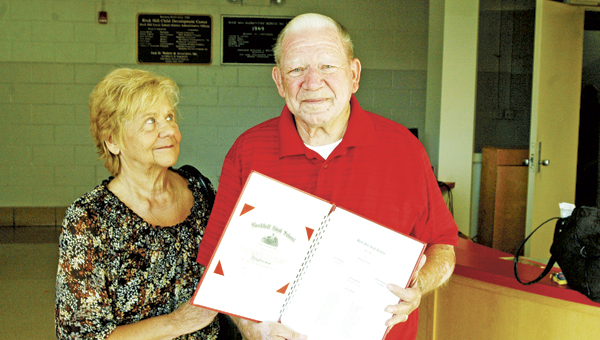 Ann Freeman looks at her husband, Joe Freeman as he holds up his diploma.

Man waits a lifetime to receive his high school diploma

After completing high school, how long would you wait for your diploma? One man waited 59 years to receive what he rightfully earned.

“I never thought this day would come,” Freeman said. “I feel wonderful.”

Freeman however did not expect a big gathering at the board meeting.

“I thought only eight or 10 people would be here,” Freeman said. “The more people that show up, the more nervous I get. I’m getting choked up.”

After he returned to the United States, Freeman went to the Rock Hill School board to obtain his diploma.

“They told me they couldn’t find my paperwork,” Freeman said. “England sent the paperwork but Rock Hill never got it.”

At the end of the 2010-2011 school year, Freeman met Kim Zornes, English teacher at Rock Hill High School, and Steve Lambert, Rock Hill High School principal, at an awards banquet sponsored by the VFW. After a casual conversation, Freeman explained his situation to Zornes and Lambert. They told Freeman they would try to help him.

Four months ago, Freeman met Zornes at the high school and with the help of Assistant Superintendent Eric Floyd, Freeman was approved for his high school diploma.

Under the Ohio Revised Code section on diplomas, Freeman met the criteria for Korean conflict veterans who were drafted during their high school years.

“I want people to see there are role models like Joe out there. Especially for our youth,” Zornes said. “A person is willing to sacrifice his personal goals for something bigger than himself. It’s a great story.”

Rock Hill officials notified Freeman a couple of months ago that he was receiving his high school diploma after 59 years of waiting.

“We were very happy and very thankful,” Freeman’s wife, Ann, said. “He couldn’t believe he was finally going to get it.”

“This has been a long time coming,” Freeman’s daughter, Joanie Igo, said. “I’m real proud. I appreciate everyone that was involved. It’s all he has talked about.”

The Rock Hill school board extended an invitation to Freeman to participate in their graduation ceremonies.

CHESAPEAKE — Repairing the almost three-year-old landslide on Rockwood Avenue in Chesapeake is going back to the drawing... read more