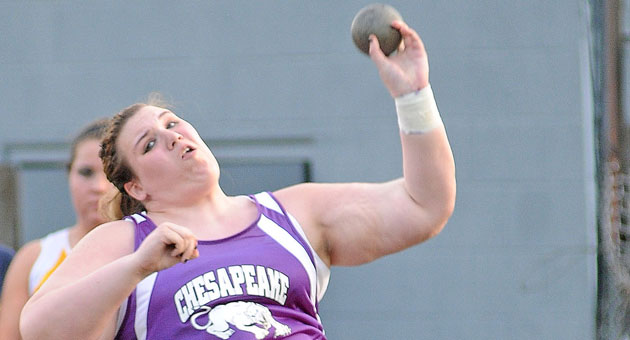 OAK HILL — It was a productive first day.

A total of 14 area track athletes performed well at the Division II district track meet and earned a berth in next week’s regional meet next Thursday and Saturday at Athens High School.

The top four finishers in each event qualify for the regionals. The second day of the meet will begin at 5 p.m. Friday.

Heading the list of qualifiers was Chesapeake’s Beth McWhorter who won the shot put with a heave of 36-3.5. Teammate Jordan Porter also qualified as she finished third with a 33-2.5 throw.

Others placing in the event were Rock Hill’s Lexie Nelson who threw 30-7.5 to place sixth and Fairland’s Celeste Blankenship who was eighth at 27-10.

The Fairland boys and girls 4×800-meter relay teams each finished first and advanced to the regional meet.

The boys’ team of Jalen Brooks, Ryan Stewart, Raine Wireman and Logan Rowe ran an 8:34.83 to win the event.

In 10th place was Chesapeake as Jackie Nelson, Caitlin Piazza, Meredith Cravens and Kara Bennett combined for an 11:30.10 time.

Advancing in the long jump were Fairland’s Kenny Smith with a leap of 20-3 to take third place and Chesapeake Patrick Hintz who was fourth at 19-11.5.

In the pole vault, Fairland’s Brandon Nylund was third at 10-6 and Chespeake’s Nate Smith was fourth as he cleared 10-feet.

In fifth was Chesapeake’s Drew McKenzie and sixth was Fairland’s Josh Sifford, both going 10-feet.

In the girls’ high jump, Bennett cleared 4-6 to finish sixth. Fairland’s Hannah Moore was seventh at 4-6 and teammate Jenna Fulks one spot back at 4-4.

The Associated Press   ATLANTA — Johnny Cueto was so dominant in his first seven starts he had to laugh... read more