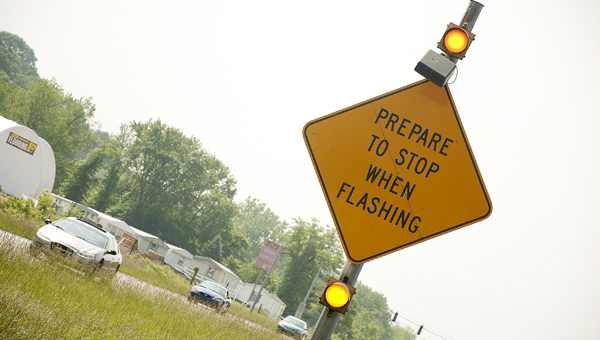 Yellow flashing lights blink on and off warning motorists of the traffic light ahead changing to red along U.S. 52 Tuesday.

You’re zipping down U.S. 52 between South Point and Proctorville, then you see them. Those flashing yellow lights on either side of the highway, officially known as the “Prepare to Stop” flashers. Those signals mean only one thing. The traffic light up ahead is getting ready to go to red.

However, too many drivers see the flashers kick on and hit the gas. That’s why the Ohio Department of Transportation is studying whether to remove them or not. While the flashers were put up for safety, they have also been cited as the cause for intersection accidents.

“What we have found is those types of lights can create confusion for the driver so they speed up and try to make the light when it’s green, thereby causing an accident,” Kathleen Fuller, ODOT District 9 spokesperson, said. “(Also) if the flashers go out and people are so used to them and they are not working, they assume the light will be green. All of a sudden it changes to yellow and there is a chain reaction for stopping.”

In Lawrence County there are seven such flashers — six on U.S. 52 starting at the Grandview intersection going east and one at the intersection of State Route 7 and State Route 243, outside of Proctorville.

Already the flashing lights have been removed from intersections at District 6 on U.S. 23 in Delaware County and ODOT has plans to take down some on U.S. 33 in District 5, east of Columbus.

ODOT will analyze the high-accident locations in the county to see if there is a correlation between accidents at those intersections and the lights.

“There is a push out of central office,” Fuller said. “We have not eliminated any in our district yet. In the next month or two they will decide if they need to be removed. They will look at it on a case-by-case basis to determine if the need is there or not.”

Two schools in Lawrence County have received money from a grant program from the Ohio Department of Natural Resources. On... read more