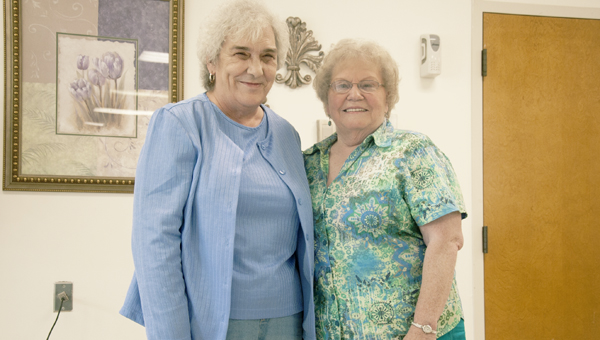 Judy Mills, left, and Edna Moore, right, have been nominated as Senior Citizens of the Year for their work to provide lunch time meals for their fellow seniors.

BURLINGTON — Although they refused to take all the credit, two women were recognized Tuesday for their instrumental work in keeping the lunchtime meal programs alive in Lawrence County’s senior centers.

Judy Mills and Edna Moore were named 2012 Senior Citizens of the Year at a special dedication at the Sybene Senior Center.

“It wasn’t a Carol thing and it wasn’t a Darlene thing,” Green said. “How we survive here is by volunteers.”

Mike Payne Ironton-Lawrence County Community Action Organization director of senior services, said the two women stepped up at a time when the centers had to discontinue their lunchtime meals.

“They were very good at keeping the centers going from a meals standpoint,” Payne said.

Meals at the senior centers were suspended after the chief cook took another job.

The failure of the senior levy last November also left the future of Lawrence County’s senior programs on shaky ground.

The CAO’s Meals on Wheels program was also shut down in January, no longer providing hot meals to homebound seniors.

For more than three months, Mills at the Ironton Senior Center and Moore at the Sybene Senior Center coordinated meals and kept the lunchtime meal program going.

The two women helped prepare, serve and clean up at meal times. They organized potlucks and sought donations from area restaurants or the seniors themselves.

“I went out and got pizza or we went out and got hot dogs,” Moore said. “And we even went over to Ponderosa and got food because we would get donations. We would get our chicken and stuff and somebody would bring in a vegetable and things to go with it.”

Moore said the Sybene center fed an average of 20 seniors each day.

Mills said the Ironton center fed about 30-40 people each day.

“There are a lot of special people there,” Mills said of the center. “It wasn’t only me. There were lots and lots of people who helped. Some of the seniors’ families brought food in. There are just so many that wanted to help.”

Linda Holmes, who goes to the Ironton Senior Center, said Mills has “a heart for people.”

“That’s why she did this,” Holmes said. “Because she couldn’t stand the thought of some of the seniors who need these meals not getting a meal each day.”

Both women agreed the senior centers are important to the county’s senior population, as are the meals served in them.

“Some of them may not get another meal,” Moore said. “They may get a snack in the evening, but for a lot of them, this is a big meal.”

What’s next for Memorial Hall?

A meeting is scheduled next week that could decide the fate of Memorial Hall after the county commissioners heard another... read more