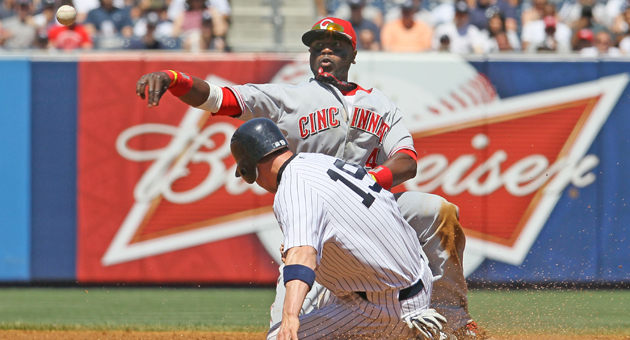 Brandon Phillips of the Cincinnati Reds completes a third inning double play after forcing out Chris Stewart of the New York Yankees at Yankee Stadium in New York, on Sunday. The Reds won 5-2. (The Ironton Tribune / MCT Direct Photo)

NEW YORK (AP) — The Cincinnati Reds discovered a new, winning way to wrap up their extended stay in New York.

They brought in Aroldis Chapman, their closer for a day — and maybe longer.

Johnny Cueto pitched effectively into the eighth inning, Ryan Ludwick delivered two big hits and the Reds turned it over to Chapman to finish off Sunday’s 5-2 victory over the Yankees.

The Reds rallied late against CC Sabathia, sending the Yankees to their fifth loss in six games.

Cincinnati took two of three at Yankee Stadium, right after splitting a pair at Citi Field against the Mets.

The Reds have tried for three seasons to find the right fit for their rocket-armed pitcher from Cuba. They considered making him a starter, and have used him as a lefty specialist and a setup man.

But with closer Sean Marshall struggling, now might be Chapman’s opportunity to move from the eighth to the ninth.

“Either inning for me is the same,” Chapman said through a translator. “Maybe one day things will get complicated and I’ll get some pressure, but I don’t feel that.”

Chapman has a 0.00 ERA in 22 1-3 innings this season, striking out 39. Pitching for the fourth time in five days, he reached 99 mph on the stadium scoreboard radar gun.

Chapman got the grounds crew to fix two dirt holes on the mound, then worked a hitless ninth for his first save of the season and second of his major league career.

So, skip, is he the closer?

“I don’t want to be answering that question today,” Baker said.

Cueto (5-1) gave up a two-run homer to Raul Ibanez in the sixth. The Yankees had plenty of traffic against him, but couldn’t score more.

Baker mixed and matched his bullpen the rest of the way, using Marshall and Logan Ondrusek to get through the eighth. The Reds held on when Alex Rodriguez’s bid for a go-ahead, two-run homer seemed to get held up in the wind and was caught on the warning track.

Cincinnati had been blanked on two singles before Ludwick homered on Sabathia’s first pitch of the seventh. An out later, Ryan Hanigan tied it when he crushed an 0-2 pitch deep to left-center for his first homer of the season.

Zack Cozart followed with a one-hop single off Sabathia (5-2). And with two outs, the big lefty suddenly lost the plate, walking Drew Stubbs, Joey Votto and Brandon Phillips on a full count to force home the go-ahead run.

That bout of wildness marked only the third time in Sabathia’s 12-season career that he had walked three batters in a row, STATS LLC said.

“He wasn’t wild until the last inning. He was pretty darn good before that, so I wouldn’t make too much of it,” Girardi said.

Ludwick had a single in the eighth, and lined a two-out, two-run double off the glove of diving left fielder Dewayne Wise in the ninth. Ludwick had missed the past two games with a bruised left elbow after being plunked by Mets knuckleballer R.A. Dickey.

Ibanez, who had faced Cueto more than any other Yankees hitter from his days in the NL, broke up a scoreless game by pulling a two-run homer into the second deck.

New York hitters had been in a 5-for-57 rut with runners in scoring position when Ibanez homered one out after Robinson Cano’s leadoff double.

It was Bat Day at Yankee Stadium — for the fans, not the hitters in the early going. Through the middle innings, the Cueto-Sabathia duel was as good as advertised.

Sabathia didn’t allow a hit until Todd Frazier grounded a single in the fifth. Chris Heisey popped up and stranded two runners that inning, and Phillips grounded into a double play with two on and no outs in the sixth.

Cueto gave up exactly one single in each of the first five innings. Yet only once did the Yankees get a runner past first base in that span — after a pair of four-pitch walks, Rodriguez flied out on the first pitch to end the third.

NOTES: Sabathia walked five, his most since April 2010. … Yankees 1B Mark Teixeira didn’t start in the series as he tries to shake his persistent cough. He pinch hit in the ninth and reached on an error. … Yankees OF Brett Gardner (strained right elbow) isn’t expected to pick up a bat until Thursday. … Reds INF Wilson Valdez turned 34. … RHP Mike Leake (0-5) starts for the Reds at home Monday night vs. Atlanta LHP Mike Minor (2-3). … Yankees RHP Hiroki Kuroda (3-5) starts at home Monday night vs. Kansas City RHP Felipe Paulino (1-1).

By JIM WALKER Tribune Sports Editor   OAK HILL — When the Coal Grove Hornets got to the regional track... read more