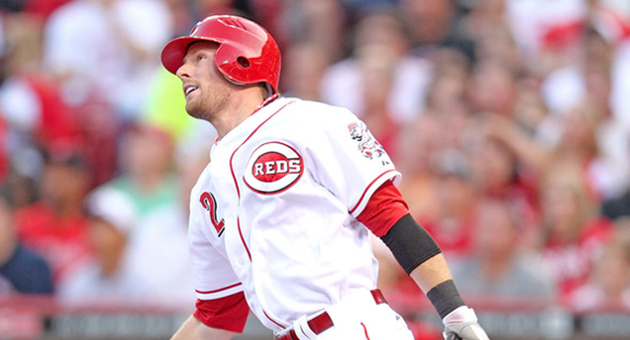 Cincinnati Reds’ shortstop Zack Cozart watches his second home run in as many days to help beat the Atlanta Braves 4-3 on Tuesday. (The Ironton Tribune / Courtesy of The Cincinnati Reds)

CINCINNATI — All joking aside, Brandon Phillips’ renewed power has more to do with his hamstring than his biceps.

Phillips drove in three runs with a pair of homers off Brandon Beachy on Tuesday night, leading Cincinnati to a 4-3 victory over the Atlanta Braves in another game of all-or-nothing that got the Reds second baseman back in the flow.

Nice try. Nobody bought it.

He hadn’t homered since April 24, an indication something was wrong with his swing. He pulled his left hamstring in the fourth game of the season and had to adjust his stance, standing more upright.

Now that the hamstring is healed, he’s back into his usual crouch at the plate.

“That really helped me a lot,” said Phillips, who watched video of swing before the game and made the adjustment.

Rookie shortstop Zack Cozart also homered off Beachy (5-2) as the Reds got the best of another high-powered game. The teams have combined for 10 homers in the two games, seven of them by Cincinnati.

“It is pretty wild,” said Braves leadoff hitter Michael Bourn, who had his first career multihomer game with two solo shots. “They hit some, we hit some. Ten in two games is a lot, I don’t care what ballpark you’re in. You don’t expect that.”

The Reds moved a season-high four games over .500 at 23-19 with their fourth straight win.

Beachy is one of the majors’ best at keeping the ball in the park — every park except Great American, that is. He hadn’t given up two homers in a game since his start there on July 24.

Took him only four innings to top it, giving up a career-high three.

The right-hander had allowed only one homer in his first eight games this season, tied for fewest in the majors by a starter. Phillips hit a full-count pitch 422 feet to center field for a 2-0 lead in the first inning, setting the tone.

“I’m not going to make the ballpark an excuse for any of those three home runs,” said Beachy, who came in leading the majors with a 1.33 ERA. “None of the three pitches was where they were supposed to be. Other than those three pitches, I pitched the way I wanted to tonight.”

Cozart hit his second homer in two games, and Phillips led off the fourth inning with another homer for a 4-2 lead. It was Phillips’ ninth career multihomer game and the fifth by a Reds player this season.

In addition to getting some tips by watching video of his swing, Phillips got a pointer from Braves third baseman Chipper Jones before the game.

“He said you’ve got good hands, use your hands,” Phillips said.

Mat Latos (3-2) gave up five hits, including the first of Bourn’s two homers, in seven innings to win his third straight decision. Left-hander Aroldis Chapman fanned two in the ninth for his second save, hitting 100 mph three times in 18 pitches.

The Cuban pitched for the first time since his arrest early Monday morning for driving 93 mph on an interstate in suburban Columbus, Ohio. Police said he had a suspended license.

Chapman got a loud ovation when he left the bullpen. He hasn’t allowed an earned run this season, prompting the Reds to try him in as closer.

Caleb Lloyd, a college student who caught two home run balls in Cincinnati’s 4-1 win on Monday night, was an honorary captain for Tuesday’s game. He and coach Billy Hatcher took out the lineup card, giving Lloyd a chance to tell his story to the umpires.

And, no, he didn’t catch any of the five balls hit into the stands in the teams’ second straight night of home run derby.

Just like on Monday night, the Braves couldn’t hit enough homers to keep up.

Bourn homered on Latos’ sixth pitch, his first game-opening homer of the season and the third of his career. Bourn also homered off Logan Ondrusek in the eighth.

Jason Heyward had an RBI double in the fourth, the only run of the series that hasn’t come off a homer.

NOTES: Jones took infield practice, moving gingerly around the infield. Jones missed his fourth straight game with a swollen left calf, hit by a hard grounder on Friday night. He might be back in the lineup on Wednesday. … C Brian McCann was a late scratch after he became ill. … Reds RH Nick Masset, sidelined since spring training by an inflamed pitching shoulder, hopes to resume throwing later this week. … RH Bronson Arroyo makes his 300th career start on Wednesday, facing Atlanta’s Tommy Hanson. Arroyo is 114-107 career.

The Associated Press   COLUMBUS — The 109th meeting in football of rivals Michigan and Ohio State will kick off... read more