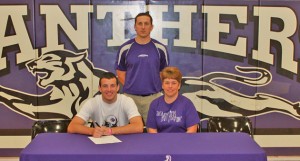 CHESAPEAKE — Have football program, will travel.

Much like the old “Have Gun, Will Travel” television show with Richard Boone, Chesapeake Panthers’ senior linebacker and fullback Brandon Noble has his pads, helmet and cleats strapped to his car and ready to go play.

Noble will get to travel to Alderson-Broaddus College in northern West Virginia next fall as the Battlers’ re-start their NCAA Division II program.

“I was never ready to quit. If there’s a place that wants me to play football, I’ll be there my whole life,” said Noble.

The school will be a club program this fall before joining the West Virginia Intercollegiate Athletic Conference in 2013. Noble sees joining the program at its infancy as a plus.

“They’re getting new facilities and my first year doesn’t count so I can play five years instead of four,” said Noble.

Besides the chance to play five years without a red-shirt season, Noble said he knew A-B was the place for him after visiting.

“They showed the most interest. I was always getting phone calls and emails,” said Noble. “They reminded me a lot of home. The coaches are real nice.”

Noble led the Panthers in tackles as a sophomore and junior. Teams began to run in other directions last season and he was second on the team in tackles with 86 to go with two sacks, seven stops for a loss and two interceptions.

“He’s a great kid who works hard in the classroom and on the field,” said Panthers’ coach Andy Clark. “Brandon has been a solid linebacker the last three years. He’ll be fine at the college level. He’ll adjust. He’s already getting bigger.”

Playing at A-B, Noble will get a chance to play against Marietta College where teammate Taylor Banaei signed to play.

“I love defense. I hope to play linebacker, but they may play me at tight end or fullback. Hopefully I’m not on the offensive side. That way (Banaei) and I both play defense and we can cheer for each other.”

Noble plans to major in criminal justice and possible pre-law.