You can ‘Banks’ on it 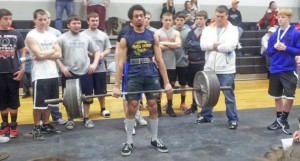 Eric Banks ­— a senior at South Point High School — started lifting weights in his basement when he was 14. Four years later, that hard work paid off as he placed fourth overall in the state powerlifting meet held in Kenton. Competing in the 155-pound class, Banks had a deadlift of 460 pounds that was the most in that event in his division. “He started out just messing around in the basement and now he’s really blossomed,” said Eric’s father, Rodney Banks. Eric was first in the regional meet held at Coal Grove High School.