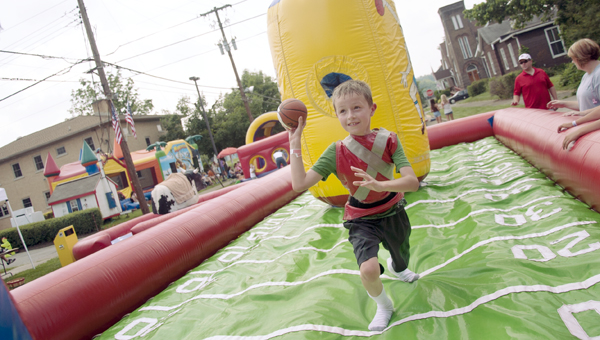 Dylan Bok of Hilliard, takes part in the bungee run.

Nine-year-old Dylan Bok took aim with his dart at the balloons bobbling on a pegboard under a tent on Quincy Street and was rewarded with a resounding “pop… pop … pop.

His prize was an inflatable plastic jet, just what he wanted. When his brother, Dawson, tried his hand at the game, he wasn’t as successful. But that was all right.

“I’ll share with him,” Dylan told their mother, Jennifer Bok.

The trio were taking in this year’s Charity Fair, an annual fundraiser for the Ironton Catholic Schools held on the grounds of St. Joseph High School Saturday that is as much a tradition for the Memorial Day weekend as the big upcoming parade itself.

Bok, now of Hilliard, graduated from St. Joseph High School and makes a point of coming back each year to the Charity Fair.

“This supports the school and it’s a chance for alumni to come together,” she said.

Manning the games and raffle tables were mostly parents of children who attend the schools.

Paula Litton, who started her shift at the ring toss table at 11 a.m., has a child in each school — Shannon at St. Joseph and Emily at St. Lawrence. By 1:30 p.m. she was splashing herself with ice-cold bottled water to try to stay cool.

The weather may be daunting, but Litton has volunteered at the fair for four years.

“It really helps with things for the kids at school,” she said.

Raffle baskets this year ran the gamut from scrapbooking items to gardening paraphernalia to perfumed soaps for the bath.

Under a tent was a makeshift shop with china, religious items, knickknacks and jewelry, some of which was made by Mary Lu Mullins of Ironton, who sat nearby restringing the beads of a necklace. Mullins makes a regular appearance at the fair.

“For more years than I can count,” she said. “It’s a tradition. Everybody comes.”

By JIM WALKER Tribune Sports Editor   RUSHVILE — Going to the state meet is as easy as one, two,... read more