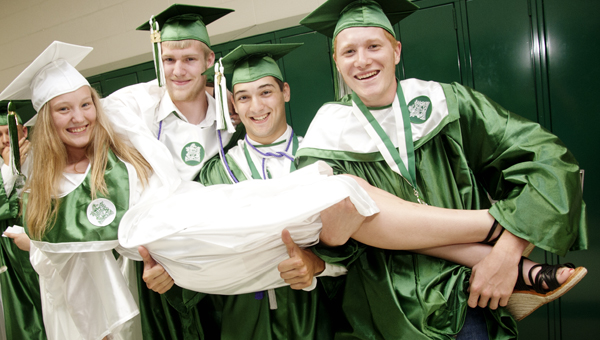 PROCTORVILLE — With their medals of accomplishments jingling and their colored chords of academic excellence swaying, the Fairland High School Class of 2012 made their final march through the school’s hallway and into the gym.

On Friday, 134 seniors graduated and began new chapters in their lives.

For many students, as well as parents, the occasion was bittersweet.

“…It is mostly bitter,” said graduate Katie Fuller. “I don’t want to leave high school, but I am excited to start that new chapter in my life.”

“I feel like I’m prepared,” Fuller said. “My parents got me ready.”

Laurel Peace said she is nervous to leave high school behind, but is ready to start college at Marshal University. Peace plans to study English and secondary education.

Peace said she would miss seeing her friends everyday and even some of the teachers.

“I really enjoyed Mrs. (Tara) Sansom,” she said. “I had some great times in AP English. … She helped me through it.”

“I feel excited and sad,” Murphy said, saying he has begun the process of letting her grow up.

Murphy also had some advise to bestow.

“I would tell her just to keep her head on straight, study hard and follow her dreams,” Murphy said.

Principal Chad Belville said the Class of 2012 performed well both academically and athletically during their years at Fairland.

“They have been an extraordinary group of kids,” Belville said. “They’ve carried on a tradition of excellence both academically and in life away from academics. They’ve been instrumental in helping to build school spirit and they’ve performed well. We’ve had teams go to athletic competitions. We’ve scored excellent in state testing. They are really special.”

Belville said the students earned more than $500,000 in scholarship opportunities.

Construction continues at the Ro-Na Theater on South Third Street. The Friends of Ironton will have an open house Monday... read more