Reds use HRs to rock Rockies 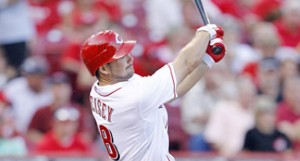 Cincinnati's Chris Heisey hit his first home run of the season — a three-run shot in the first inning — to help the Reds beat the Colorado Rockies 10-3 on Saturday. (The Ironton Tribune / Courtesy of the Cincinnati Reds)

CINCINNATI (AP) — Chris Heisey had come close enough to hitting a home run this season that he knew one eventually would come. Still, he was starting to get a little anxious.

Heisey finally got on the board Saturday, giving Cincinnati the lead with his first homer of the season and four relievers made it stand up in a 10-3 win over the Colorado Rockies.

“I told my wife (Lisa) a few times that I need to hit one one of these days just to get it off my back,” the Cincinnati outfielder said. “It was nice to finally get one.”

Devin Mesoraco and Ryan Ludwick also homered as the Reds overcame a poor start by Mike Leake to pick up their seventh win in eight games. The power was badly needed, manager Dusty Baker said.

“Leake couldn’t keep the ball down,” Baker said. “(Colorado) can hit. You’ve got to outscore them, and that’s what we did. It was nice to see some balls leaving the ballpark.”

“All the guys are just trying to go out and do the job and give the team a chance to stay in the game or come back,” Hoover said.

Colorado right-hander Jeremy Guthrie’s first career start in Cincinnati was forgettable. Guthrie (2-3), in his third start since coming off the disabled list on May 15, allowed a season-high 10 hits and tied his season by giving up six runs. He had five strikeouts and a walk in five innings.

“I never really got into too much of a groove,” Guthrie said. “I fought myself early in the count throwing balls. I got behind a pretty good lineup knowing I had to throw strikes so I didn’t walk guys. It wasn’t a well-pitched game on my end.”

Four of the first five Colorado batters Leake faced got hits, but the Rockies managed just one run. Marco Scutaro led off the game with a triple off the left-field wall on the third pitch and Tyler Colvin followed with an RBI single. Carlos Gonzalez hit into a double play, helping the Reds avoid more damage.

The Reds took a 4-1 lead in the bottom of the first, which started with Zack Cozart reaching on third baseman Jordan Pacheco’s two-base error. Two outs later, Brandon Phillips doubled to drive in Cozart, Jay Bruce walked and Heisey hit a 0-1 fastball 367 feet into the stands down the left-field line for his first home run since last September.

“I’d hit a couple that could have gone out, but either it was the wind or I hit it to the wrong part of the ballpark,” Heisey said. “I just reacted to it and got enough of the barrel on it.”

“We didn’t get off to a very good start,” he said. “If you look back, the error to start the game came back to haunt us after the Heisey at-bat, but with that being said, as we went along, we didn’t pitch particularly well. We really didn’t. Jeremy was not sharp, but you would have liked to have the opportunity to get him jump-started correctly.”

Colorado knocked Leake out of the game with a two-run fourth that started with doubles by Pacheco and Nieves on back-to-back pitches to start the inning and Colvin’s two-out RBI single.

Leake, 1-0 with a 1.29 ERA over his previous two starts, lasted just 3 2-3 innings, allowing nine hits and three runs with one walk and four strikeouts.

“We would like to have seen Leake go deeper, but they had the heart of their order coming up, and they can score quickly,” Baker said.

Mesoraco led off Cincinnati’s fourth with his third homer of the season and second in his last two games, a 406-foot blast to left field on a 3-2 pitch. Mesoraco hit a go-ahead grand-slam in Cincinnati’s 6-3 win over Atlanta on Thursday. The Reds broke the game open with a four-run seventh, three on pinch-hitter Ludwick’s 421-foot, three-run shot into Cincinnati’s bullpen in left-center field on a 1-1 pitch from Matt Reynolds. The homer was Ludwick’s fifth of the season, and the fifth of his career as a pinch-hitter.

Notes: Pacheco extended his career-high hitting streak to 11 games (16 for 44, .364) with a second-inning single. … Rockies LHP Jorge De La Rosa was scheduled to make the first start of his second rehab assignment Sunday for Triple-A Colorado Springs at Fresno. De La Rosa underwent surgery to repair a torn ligament in his left elbow last season. … Reds LHP Aroldis Chapman’s 20 appearances without an earned run to begin a season are a franchise record, surpassing the record of 18 set by John Hudek in 1998, according to Elias Sports Bureau in stats distributed by the team. … OF Michael Cuddyer returned to Colorado’s lineup after being scratched from Friday’s with a stiff neck. … Reds RHP Mat Latos seeks his second win of Cincinnati’s homestand in Sunday’s series finale. He’ll be opposed by 49-year-old Colorado left-hander Jamie Moyer.

It wasn’t long after the young woman saw the sky turn black from what seemed like endless waves of military... read more