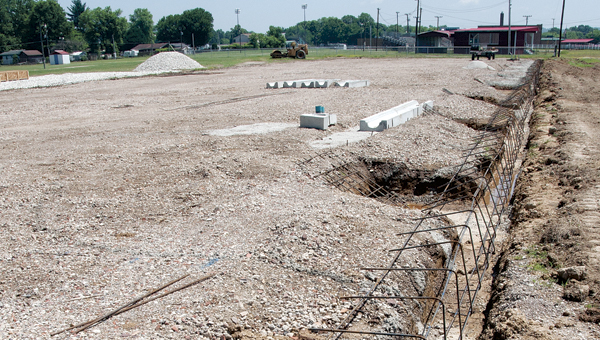 Metal rods outline the future site of the new fair barn on location at the Lawrence County Fairgrounds.

In a unanimous vote the county fair board Tuesday terminated its contract with the Canton contractor hired to put up a new barn at the fairgrounds.

Now the fair board wants to recover $198,000 given to the contractor. The board will then determine how much, if any, it the company has earned. Meanwhile, two county officeholders have called for an investigation by the state attorney general.

“The fair board terminated (the contract) with Structural Steel due to the delays and the failure to return unearned money and a lot of other problems,” Randall Lambert, chairman of the fair barn committee, said. “The main reason is the board did not feel that Structural Steel was going to have the barn built by the fair.”

Structural Steel was one of three out-of-county contractors who bid on the project to build a 300-by-60-foot livestock barn and arena. The project was to be funded through $400,000 in pledges made mostly during last year’s fair. To get a better interest rate the county commissioners agreed to act as the fiscal agent issuing bonds at 2.99 percent interest rate.

Construction was originally to have started on Feb. 1; however that date was repeatedly pushed back after a spring groundbreaking.

Now the fair board has asked STI Construction from Powell to put up the structure.

“(That money is) to be placed in escrow to determine how much, if any, was earned by Structural Steel,” Lambert said.

There have been three payments from the $400,000 with the first $100,000 basically to purchase the prefabricated barn. It is the second and third outlays that the fair board wants back.

“There has been no positive response, just a request for more time to consider,” Lambert said.

However, Jeff Simmons, owner of Structural Steel, says the construction delays have been caused by the fair board’s failure to obtain required permits from the county and state.

“I can’t proceed without a permit,” Simmons said. “There has been no permit issued. That absolutely is not in my contract to provide the permit. … Legally, I can’t proceed.”

Simmons said he plans to take legal action against the fair board.

“I meet with my attorney (Thursday),” he said. “We do intend to sue for breach of contract and will be seeking damages greater than any money held by Structural Steel.”

Simmons, whose company has been in business since 2003, declined to give the name of his attorney.

“We called the attorney general to ask that office to look into this,” Pratt said. “I grew up with the fair and it is very discouraging this has happened. We are working diligently that the barn be built on time. The fair board has done the right thing to terminate the contract with Structural Steel and (we are) pursuing a complaint with the attorney general.”

Lambert said pouring the footer should be finished by early next week. Then there is a five-day curing period before the metal structure can be placed on the concrete.

“(STI) have agreed to have extra men and extra hours to get it erected as quickly as possible,” he said. “The board is going to do everything possible to have as much of the barn and the facility completed by the fair.”

By Billy Bruce For The Tribune   His opening and closing phrase said everything his ministry is prepared to bring... read more