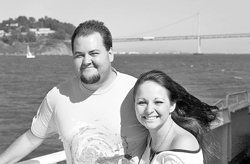 Meagan Hairston of Ironton and Joshua Joseph of Pedro were married at 7:30 p.m. June 2, 2012, at Smathers Beach in Key West, Fla.

The bride is the daughter of Deana Goodwin and Michael Hairston of Ironton. She is the granddaughter of Lois and the late Jack DeAutremont and Dolores and the late Russell Hairston. She is attending Marshall University studying Japanese and elementary education. She is working as an English as a second language tutor.

The groom is the son of Mary and Ralph Joseph of Pedro. He is the grandson of Donna and Ralph Joseph, Faye Kidd and the late William Maddy. He graduated from Marshall University and works as an IT instructor at Mountwest Community & Technical College.