Cause of house fire under investigation 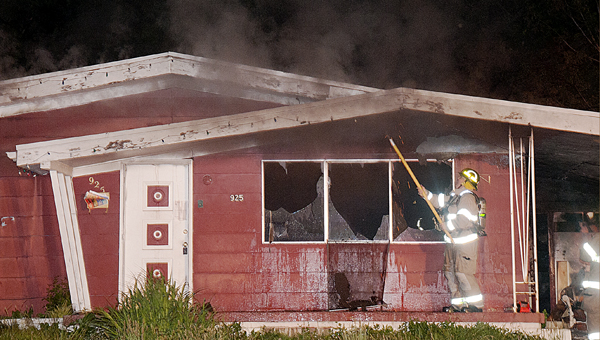 Ironton firefighter Daryl Foglesong works the scene of a house fire while smoke pours through the roof of the building, located at 925 S. Tenth St., late Saturday evening. Neighbors said the home was empty and reported to have heard a large bang before seeing flames.

The state fire marshal will investigate this morning a blaze at an unoccupied house in foreclosure that was the object of a Saturday night fire.

Crews had the single-story, wood structure under control soon after arrival, according to Fire Chief Tom Runyon.

“They got it under control pretty fast,” Runyon said. “It had started in the rear entry of the house and had spread under the carport and was endangering residences on the southeast side.”

There was no one at the house and there were no utilities connected, Runyon said.

Runyon said he and the fire marshal will investigate the site of the blaze and survey the neighboring structures to see if there was any damage.

As of early Sunday morning there did not appear to be any damage to either structure.

Until the fire marshal’s report, Runyon is calling the cause of fire undetermined.

Celtics get by Miami in OT

Boston Celtics’ Keyon Dooling celebrates after hitting a three pointer in the second quarter against the Miami Heat during Game... read more