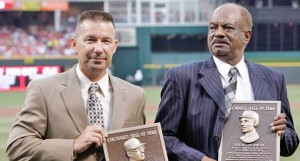 CINCINNATI (AP) — Pedro Borbon, who pitched 10 years for the Cincinnati Reds and helped the Big Red Machine win back-to-back World Series titles, died of cancer on Monday. He was 65.

Borbon had been in hospice care at his home in Pharr, Texas, his son, Pedro, told The Associated Press in a phone interview. Borbon requested to be cremated without a memorial service, his son said.

Borbon was a key member of the bullpen on Cincinnati’s 1975-76 championship teams, winning 13 games during those two seasons. He also pitched for the Angels, Giants and Cardinals. In 2010, he became the third reliever to be inducted into the Reds Hall of Fame.

“He was probably most proud of the World Series championships,” he son said. “He would talk about it often. He was also proud that he never once had a sore arm. He could pitch almost every day.”

Borbon appeared in more games than any other NL pitcher from 1970-78. He holds the club record with 531 career appearances. Borbon pitched in 20 playoff games during his career with a 2.55 ERA.

“The entire organization is very sad to hear of the loss of another member of our baseball family,” Reds owner Bob Castellini said. “Pedro was an important contributor to the success of the Big Red Machine, and he always will be remembered for his colorful personality and his contributions to that wonderful time period in our history.”

Borbon became part of baseball lore in 1995 when, at age 48, he decided to return to the game as a replacement player during Major League Baseball’s labor dispute. He joined the Reds in Florida for spring training and faced two batters. He struck out the only batter he faced in an exhibition against the Pirates in Bradenton.

The Reds released him after he faced one batter in another game against the Indians, fell down while trying to field a bunt and threw wildly to first base for an error.

Borbon also got notice for his mention in the 1980 movie “Airplane!” While trying to concentrate, pilot Ted Striker hears a public address announcer’s voice in his head: “Pinch hitting for Pedro Borbon … Manny Mota.”

“He was always talking about that,” his son said. “A lot of people remember him by that. He liked that.”

Another son, Pedro Jr., pitched nine seasons in the majors.

By JIM WALKER Tribune Sports Editor   CINCINNATI — The success of the Cincinnati Reds this season is due mainly... read more