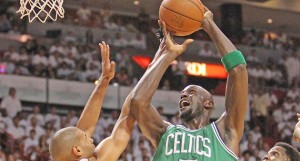 Kevin Garnett of the Boston Celtics shoots over Shane Battier of the Miami Heat during Game 5 of the NBA Eastern Conference Finals, Tuesday at AmericanAirlines Arena in Miami, Fla. Garnett had 26 points as the Celtics won 94-90. (The Ironton Tribune / MCT Direct Photo)

MIAMI (AP) — A week ago, the Boston Celtics were too old.

Three games later, they’re one win away from the NBA finals.

And Miami — the team that was constructed with hopes of supplanting Boston as the power in the Eastern Conference — is suddenly in big trouble.

Kevin Garnett finished with 26 points and 11 rebounds, Paul Pierce scored 19 — including a huge 3-pointer over LeBron James’ outstretched arm with 52.9 seconds left — and the Celtics beat the Heat 94-90 on Tuesday night, taking a 3-2 lead in the East finals that now shift to Boston for Game 6 on Thursday night.

“We’ve done nothing,” Celtics coach Doc Rivers said. “We’re playing a heck of a basketball team. So just because we’re going to Boston, I told them, we have to play. They’re not going to give it to us. We have to go get it.”

James finished with 30 points and 13 rebounds for Miami, though he went 8 minutes without scoring in the final quarter. Dwyane Wade scored 27 for the Heat, who got no more than nine from anyone else.

“We wouldn’t want to be in this situation but we never get too high or too low in a series,” James said. “We had an opportunity to come home and take a lead, but we didn’t. So we have to go up to Boston and win a game.”

Pierce’s 3 put Boston up 90-86. Miami got within two points twice, and argued that it should have had a steal with 8.8 seconds left. Instead, a foul was called on Udonis Haslem, Garnett made two free throws, and the Celtics knew they had just stolen one on Miami’s home floor.

Now all they need is one home win of their own to clinch a trip to either Oklahoma City or San Antonio for Game 1 of the NBA finals. The title series starts June 12.

The Celtics were down by 13 points in the second quarter, then down nine in the third, and answered both times — prevailing on a night where they shot just 41 percent, and got outrebounded 49-39.

“We stayed with it,” Garnett said. “We had a rough first quarter, first half. We got our stops and made our run ourselves. And when we had to, we had stops.”

Allen and Mickael Pietrus scored 13 apiece for the Celtics, who got 10 from Brandon Bass. Pietrus hit two huge 3-pointers in the fourth quarter for Boston, which remained perfect with this core when facing maybe the most pivotal situation a best-of-seven can offer — a Game 5 with a series tied 2-2.

Pierce, Garnett, Rajon Rondo and Ray Allen are now 9-0 in that scenario.

“We came in with the right focus,” Pierce said. “That was key for us.”

So Game 5s are magical for Boston. Sometimes, they are for James as well.

And sometimes — this one included — they’re not.

James’ most memorable moments have come in Game 5s, like the epic 48 points where he just carried Cleveland on every possession down the stretch at Detroit in 2007, and the 120-88 loss to the Celtics in 2010, his last home game with the Cavaliers.

This one offered more theater, of course. James hit a 3-pointer to give Miami a two-point lead with 8:10 left, closed out on Pierce to force an airball on the next possession, and eventually Miami pushed the margin out to 78-72 on a layup by Wade with 6:17 to play. On that play, James looked gassed, gasping for air as he stood near the baseline.

Those might have been the last gasps the Miami home crowd sees this season. Boston closed on a 22-12 run.

“Every time we got them down, they made runs,” James said. “They made us stagnant offensively, got stops and got back in the game.”

Boston tied the game twice early in the third quarter, before Miami peeled off nine straight points to go up 59-50. Four players scored for the Heat during that quick burst, highlighted by Shane Battier’s corner 3-pointer and a lazy turnover from Rondo, who threw the ball into the backcourt without being pressured by any Miami defender.

But just as they did in the first half when Miami looked poised to pull away, the Celtics rallied — and then some. A 15-1 run gave the Celtics a truckload of momentum and 65-60 lead going into the fourth, capped by Keyon Dooling connecting on a 3-pointer from near the Miami bench with 2 seconds left.

There were four lead changes in the fourth quarter, and the game was tied for the final time when Wade made an acrobatic layup with 1:39 to play.

Miami didn’t lead by more than eight points at any time in the three previous games of the series. The Heat changed that quickly, and maybe it was fitting that Chris Bosh got them their first double-digit advantage since Game 1.

Bosh came off the bench for his first minutes since straining a lower abdominal muscle in Game 1 of Miami’s second-round series against Indiana. His three-point play with 1:17 left in the opening quarter — punctuated with a stare-down for some cheering fans — capped a 24-13 Miami run to open the game. James made a 3-pointer with 9:39 left in the half, and the Heat went up 31-18.

The Celtics did what Miami did to them in Games 3 and 4 at Boston. They started chipping away.

Miami missed 15 of its final 17 shots of the first half, with four turnovers thrown in there as well, and the Celtics took advantage. After James’ 3-pointer, Boston outscored Miami 22-11 to close the second quarter — Garnett got six of his eight first-half points in the final 3:09 — and the once-sizable Heat lead was down to 42-40 by intermission.

“We just told our guys, ‘Hang in there, just hang in there, don’t overreact,”’ Rivers said. “The longer we’re in the game, the better we’ll play.”

That was the way Game 5 went.

And the series has gone the same way.

NOTES: Dorell Wright, a member of the 2006 Heat championship team and now with Golden State, was in attendance. A denim-vested Amare Stoudemire of the New York Knicks — Miami’s first-round playoff foe — was seated courtside, and former Celtic Glen Davis was near the Boston bench. … Wade scored seven points in the first 4:22 of the game. He didn’t score again in the first half, and after scoring 26 points by halftime of the series-clincher against Indiana, he has 29 points in five first halves against Boston in this series. … Pierce said before the game that he does not expect to need offseason surgery to repair the sprained MCL in his left knee. “No complaints,” Pierce said.

CINCINNATI (AP) — The fastball wouldn’t stay down. The other pitches? Not much better. Homer Bailey knew he was in... read more