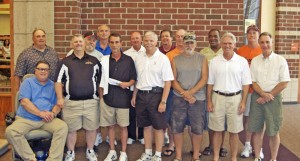 It was a season to remember, and that’s just what the 1972 Ironton Fighting Tigers’ baseball team did.

Gathering for a 40-year reunion of the school’s only state baseball title, many members of the team reminisced about that magical season with head coach Mike Burcham.

“Everybody picked everybody up. I remember (Bob Bayert) was mad because he didn’t get a hit in the last inning of the championship game when he hit a sacrifice fly. One of the players said, ‘Don’t you know what you just did? You knocked in the winning run.’”

Ironton breezed through the tournament by beating Wheelersburg 6-1, South Point 9-0, Sheridan 9-1 and Steubenville Catholic 7-3 in the regional finals.

In the Class AA state tournament, Ironton rallied in the top of the seventh inning to score five runs and win the semifinal game 9-7 over Columbus Bishop Wehrle, the defending state champions who had their entire team back.

“I remember the Wehrle people on the dugout ready to rush the field and we kept getting hit after hit. They were stunned,” said Steve Harvey, Ironton’s team chaplain who was a classmate of many Ironton players during 1972.

“They started celebrating early. We really gave it to (their fans). That was a lot of fun.”

In the state finals, Ironton again rallied with two runs in the top of the seventh inning to beat Solon 3-2.

Hard-throwing Jeff “Sticks” Collins went six innings and struck out 11. Jerry Murnahan — who pitched a complete game in the semifinals and also struck out 11 — pitched the seventh inning for the save.

Not only did Ironton rally in both state tournament games, but the Fighting Tigers got five runs in the seventh inning to win the regional title game against Steubenville Catholic.

“The thing about that team was there wasn’t an easy out in the lineup. We were down in the sixth and seventh inning of all (of our last) three games and our guys always believed they would win. This bunch never quit,” said Burcham.

“You have to have good players to win. Every coach there is will tell you the same thing. You don’t win without players.”

Shortstop Jimmy Payne said Burcham deserves to get some of the credit.

“He always gives credit to the players, but he was the reason we played to our potential and played with confidence,” said Payne.

Outfielder Ricky Boykin gave Burcham and all his high school coaches in football and baseball a lot of praise.

“The coaches taught me things that took me through life. It was a great experience. You really taught us how to be winners,” said Boykin.

In a championship season with a record of 29-3, there are plenty of season statistical records along with career marks.

Greg Spence had a 15-game hitting streak and Ironton’s 18-game winning streak to close the season remains a school record.

Ironton’s pitching staff had an impressive 2.68 earned run average, but was an amazing 1.485 in the 1973 season with Jerry Murnahan and Jeff “Sticks” Collins handling the bulk of the pitching. Murnahan was 8-3 and Collins 7-0.

Murnahan struck out 132 batters in 88 innings and had four shutouts. He also owns the record for most career strikeouts with 322 and shutouts with nine. He had a 30-6 career won-loss record, the most career wins by any pitcher.

Only Phil Murnahan — Jerry’s older brother — has more shutouts in a season with five. Phil — clocked in the upper 90 mile-an-hour range — had three no-hitters in 1968.

Phil Murnahan and Jimmy Williams are the only pitchers to fire back-to-back no-hitters in a season.

Collins owns the school’s only perfect game. It came during his senior year in 1974.

Spence and Payne tied for second in home runs.

During the tournament run, eight of the nine starters hit a home run.

Each year the United States Department of Agriculture provides free or low-cost lunches to millions of school children. According to... read more