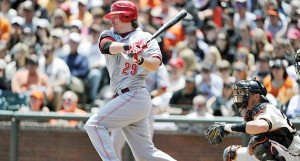 Cincinnati catcher Ryan Hanigan singled to centerfield leading off the sixth inning for the only Reds’ hit Thursday in a 5-0 loss at San Francisco. (MCT Direct Photo)

SAN FRANCISCO (AP) — Cincinnati kicked off its longest road trip of the season with a thud, managing only three baserunners against Giants starter Madison Bumgarner.

Then again, no one’s been having much luck offensively against San Francisco these days.

Ryan Hanigan’s leadoff single in the sixth inning was the only hit by the Reds in a 5-0 loss to the Giants on Thursday night, San Francisco’s fourth consecutive shutout that trimmed Cincinnati’s lead to one game in the NL Central.

“Bottom line, he carved us up,” said Hanigan after the Reds were blanked for only the second time this season. “I think we were a little flat. I don’t think we had the right approach, the team in general.”

Bumgarner (10-4) completed his first career game with his first shutout as the Giants tossed four consecutive shutouts for the first time in franchise history. Bumgarner walked one and struck out eight in winning his fifth straight decision.

The Giants became the 17th team to have four or more consecutive shutouts since 1918. The Baltimore Orioles did it most recently, with five straight in 1995.

Hanigan’s hit, a sharply hit single that went over the mound and into center field, accounted for the Reds only baserunner over the final five innings against Bumgarner.

Drew Stubbs also walked twice but was caught stealing in the fourth, and Bumgarner retired 17 of the final 18 batters he faced.

Johnny Cueto (9-4) had his four-game winning streak halted despite turning in a quality start. He allowed three runs — two earned — on six hits in six innings. He walked four and struck out three.

“There’s not a whole bunch you can do (when) you’re not getting hits and you’re not getting baserunners,” Baker said. “You just hate for Johnny to lose like that. On most occasions you give up two or three runs, you got a pretty good chance to win the ballgame.”

It’s the first time the Reds have been held to one hit since July 29, 2009 against San Diego.

Angel Pagan, Pablo Sandoval, Gregor Blanco and Ryan Theriot each drove in a runs for the Giants, who have won four straight and six of seven to move into first place in the NL West for the first time this year. Melky Cabrera had two hits and reached base four times.

Bumgarner faced two over the minimum as Giants pitchers extended their scoreless streak to a San Francisco-record 36 innings. He walked Stubbs in the first, and then retired eight straight before walking him again in the fourth.

Bumgarner had allowed 13 runs in his first 13 2-3 innings against the Reds, losing twice.

The Giants scored twice with two outs in the first. Cabrera walked and Buster Posey singled ahead of Pagan’s RBI single. Posey came around to score on a throwing error by right fielder Jay Bruce.

NOTES: Reds IF Brandon Phillips was a late scratch because of continuing effects from the blow to the head he received during Wednesday’s 8-4 loss to the Milwaukee Brewers. … The Reds have lost three of their last five. … Cueto had not allowed a run to the Giants in his previous 22 innings against them. … The Giants’ pitching staff has an NL-leading 10 shutouts. … Bumgarner became the first Giants’ pitcher to win five games in a calendar month since Tim Lincecum in September of 2010. … Reds IF Henry Rodriguez began a rehab assignment in the Arizona League on Thursday. … Cabrera has five hits in his last 13 at bats over four games. … Giants RHP Matt Cain (9-2, 2.27) goes for his ninth straight win on Friday night. … Reds RHP Mike Leake (2-5, 4.46) has tossed seven quality starts over his last eight appearances. He’s 2-0 with a 2.82 ERA in his last eight starts.