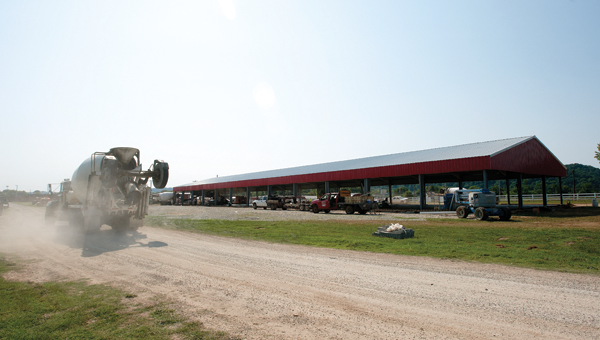 Pickett Concrete, of Chesapeake, makes its way to the back of the new livestock barn located at the Lawrence County Fairgrounds Thursday morning

The commission also authorized the port authority to borrow $700,000, which will be used to pay back the county money it had already borrowed to build a new livestock barn at the fairgrounds and also to pay the current contractors on the project. Those contractors, according to Commission President Les Boggs, were threatening to shut down the project if they were not paid.

“As commissioners, we care what happens at the fair and look after the county’s money,” Boggs said. “The money borrowed will be paid back to the county. The county will be whole. For the taxpayers this was a great way to solve the issue and move on.”

The terms are 3.3 percent over a 20-year period and the fair board and port authority will be in a lease-buy back with the fair board actually making the payments on the loan.

“There will be no cost to the taxpayers,” Commissioner Bill Pratt said.

By going through the port authority, the much sought after money will be immediately available and checks to pay the contractor will be cut today, Pratt said.

For months the fair board has struggled to build the barn it promised for this year’s fair. Obstacles included firing the first contractor for not meeting construction deadlines and threatening lawsuits to recover funds it said the contractor was given by mistake, as well as facing several hurdles to obtain financing.

Originally the fair board sought financing for the project through the county, when commissioners, acting as the board’s fiscal agent, borrowed $400,000 from PNC Bank at 2.99 percent a year interest over a 10-year period. That money was placed in a county account out of which the commission paid bills for the project at the instruction of the fair board.

The fair board planned to pay back the county from $400,000 in pledges made for the barn project from supporters. Those pledges were to be paid over a five-year period.

Now with the 20-year lease-back terms the time frame for those pledges to be paid has been extended.

“This will give those people who have pledges a lot more time to make this whole,” Pratt said.

Members of the fair board said they had asked for the commissioners’ help in order to get a better interest rate than the board could from a bank.

The Ohio Revised Code 1711.13 sets limits on the amount of indebtedness a county agricultural society can have.

Selling the property to the port authority avoids this clause.

Getting the barn built has been a long process starting with delays the fair board has placed on the shoulders of Structure Steel of Canton, the original contractor.

Approximately $300,000 was transferred to Structure Steel, although there was little work visible at the fairgrounds — $100,000 of that was for barn material. The fair board continues to dispute Structure Steel’s right to have $200,000, saying the contractor was paid for work that was not performed.

The fair board has said it plans to sue the Canton company for that money.

The fair board then went to County Treasurer Stephen Burcham seeking to issue $700,000 in bonds to pay back the county for its investment and to have funds to pay the new contractor for the project.

But bond counsel for the proposed issuance ruled that the fair board could not legally issue the bonds.

“I am happy to say we will get the barn done,” Commissioner Freddie Hayes said. “I want to thank the port authority and Bill Dingus of the LEDC for his support for these kids. We didn’t have any way to go.”

The ORC states that an agricultural society can sell property to purchase other property or sell excess property that it owns.

“When the premises in the possession or under the control of a county or independent agricultural society and used by it as a site on which to hold annual exhibitions are greater in size than is necessary for the purposes to which they are devoted, or are not suitable in their formation or character for such purposes, such society, or, if the title to such premises is in the county, the board of county commissioners, may sell any part thereof or exchange any part thereof for other lands, so as to reduce the size of such premises or change their formation or character,” according to Section 1711.26 of the code.

Boggs, seeking an opinion from county assistant prosecutor Brigham Anderson, said he was told there was no problem with the title transfer.

“From the commissioners’ standpoint I don’t see a legal problem,” Anderson said.

“I can only go on what my legal people say,” Boggs said.

On Thursday contractors laid the concrete floor for the barn; after a three-day waiting period, fans and pens will be installed.

“The electric is on and the lights were on this morning,” Hayes said. “It has been a long ordeal and a lot of hurdles. We made it through and got it done and I can’t wait to see the smiles on the kids’ faces.”

The Ironton City Council Thursday rejected a proposal from developer Jack Hager to change the zoning designation on a piece... read more