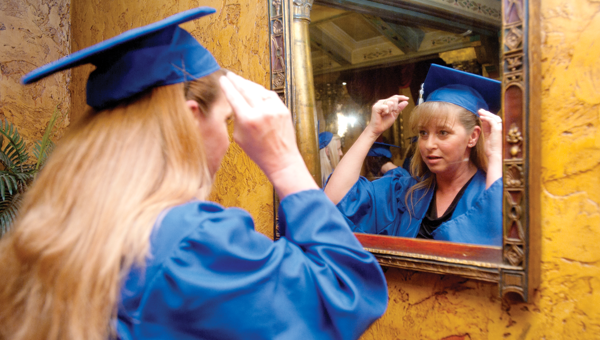 Carol Rideout gives herself one last look in the mirror before the start of the Collins Career Center commencement exercises for the adult program Friday.

The Scottown native entered the school just after graduating from Symmes Valley High School. She majored in general clerical work.

Having lost her job, Carpenter decided to go back to school and get a degree in surgical technology. But her decision wasn’t without hesitation.

“I was afraid I wouldn’t be able to study and learn,” Carpenter said. “But actually, it was a lot easier this time.”

Carpenter said her life experience helped her get through school again, and she already has an interview for another job.

“You’re never too old (to go back to school),” Carpenter said. “It was easier this time.”

Carol Rideout, 49, of Ironton, found herself in a similar situation when she lost her job at Movie Gallery when the company went bankrupt two years ago.

She already had a full-time job lined up at the Lawrence County CAO Family Medical Center in the new St. Mary’s Medical Facility in Ironton.

“And it’s all because I went to school,” Rideout said. “I never thought losing my job would be a good thing. I thought I would be scared but I wasn’t at all. Everyone was really nice.”

About 140 people graduated from the adult education programs at CCC Friday evening.

“This is what makes my job enjoyable,” said Superintendent Steve Dodgion. “To see these adults students who have set their sights on starting a new job.”

Dodgion said finding jobs is the theme of the adult education programs.

“Those dislocated workers have lost their jobs because of the economy and we’re able to put them back into the workforce,” Dodgion said.

Two more Kentucky residents were sentenced for their part in a check-forging ring. Scott Sanchez, 32, of 226 Iowa St.,... read more