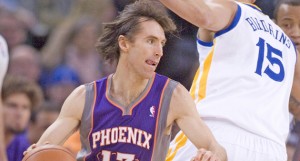 Free agent point guard Steve Nash has agreed to a sign-and-trade deal that will send him to the Los Angeles Lakers. (MCT Direct Photos)

PHOENIX (AP) — Steve Nash is going to the Los Angeles Lakers, a Pacific Division rival the two-time MVP point guard tried so hard to beat, with little success, in his eight seasons with the Phoenix Suns.

At Nash’s request, the Lakers and Suns reached a sign-and-trade deal, with Los Angeles using the trade exception it got when it sent Lamar Odom to Dallas to facilitate the transaction.

In a statement released by the agent, Nash said that after he and the Suns agreed to part ways, he re-approached them to ask to pursue a sign-and-trade deal with Los Angeles “because it is very important to me to stay near my children and family,” who live in Phoenix.

“They were very apprehensive and didn’t want to do it,” Nash said. “Fortunately for me, they reconsidered. They saw that they were able to get assets for their team that will make them better, assets they would not have otherwise had and it made sense for them to do a deal that helps their team get better.”

There had been sign-and-trade talks with New York and a lucrative free agent offer from Toronto.

The deal will put Nash on the floor with the team he tried so hard to unseat as a Western Conference power, teaming him with Kobe Bryant, Andrew Bynum and at least for now, Pau Gasol.

The Suns at least get something in the loss of their longtime leader and one of the city’s most popular athletes, although no one to help immediately, unless some or all of the picks are used in future trades.

Nash’s Phoenix teammate Jared Dudley tweeted that Nash “has not only been the best but the most unselfish player I ever played with. I only wish him the best. He deserves everything. Steve Nash has made many players millions. Only fitting to trade to a team that has a chance to win the ship and pay what he deserves.”

Nash has never made it to the NBA Finals.

He was last in the Western Conference finals against the Lakers in 2010, when the Suns lost in six games and Los Angeles went on to win the NBA title.

The Suns drafted Nash in 1998 but traded him to Dallas after two seasons because Phoenix already had Kevin Johnson and Jason Kidd at the position. Nash played six seasons for Dallas but bolted when owner Mark Cuban declined to spend big money to keep him. Then-Suns owner Jerry Colangelo brought a plane load of team players and officials to Dallas to woo Nash.

Despite his age and the fact his team failed to make the playoffs for the second year in a row, Nash was second in the NBA in assists last season at 10.7 and averaged 12.7 points. His 53 percent shooting rate was a career high.

He is one of the most accurate free throw shooters in NBA history at 90.4 percent. His 9,916 assists rank him fifth in NBA history behind, in order, John Stockton, Kidd, Mark Jackson and Magic Johnson.

The Suns resisted trading Nash during his final season and insisted they were interested in bringing him back, but they never seriously were in the discussion. Toronto and New York dominated the talk until the Lakers came on with a flash on Tuesday.

Nash’s arrival should rejuvenate the Lakers, who lost in the second round for the second straight postseason after their back-to-back championships in 2009 and 2010. The Lakers struggled to move from departed coach Phil Jackson’s triangle offense to new coach Mike Brown’s system during the lockout-shortened season, with four-time All-Star forward Gasol particularly failing to fit in while getting pushed to the third option on offense most nights.

Nash’s peerless playmaking abilities and veteran presence could smooth over those problems, particularly after a full training camp to define the Lakers’ roles in Brown’s offense.

Los Angeles hasn’t had an elite point guard alongside Bryant for several seasons, failing to address Derek Fisher’s gradual decline while the rest of the West got better. The Lakers got sub-par play last season from the 37-year-old Fisher, who was traded to Houston at the deadline.

The five-time NBA champion was replaced in the starting lineup by journeyman Ramon Sessions, who provided speed and scoring but struggled badly in his first career playoff run, nearly disappearing from the Lakers’ lineup. Sessions’ decision last month to decline his player option for next season means his career with the Lakers is finished unless he’s interested in returning as a backup, an unlikely prospect.

The draft picks probably don’t mean too much to the Lakers, who have traded away their first-round picks the past three seasons. They haven’t drafted a regular starter since 2005.

LOS ANGELES (AP) — Mike Leake got hammered in the first inning, then settled down the rest of the way.... read more