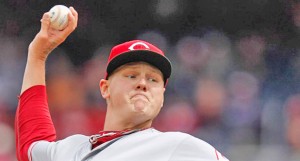 SAN DIEGO — The San Diego Padres have found a way to win games, and show no signs of slowing down.

The Padres were in last place in the NL West on June 27 with the majors’ second-worst record, but resurgent San Diego is on a tear. Everth Cabrera’s bases-loaded single in the ninth inning gave the Padres their sixth consecutive victory, a 2-1 win over the Cincinnati Reds on Thursday night.

San Diego, which has won eight of 11 games, found a way to win after former Padres pitcher Mat Latos kept them handcuffed for seven innings.

“Over the last 3 1/2 weeks, the players and coaches sensed we were playing better,” Padres manager Bud Black said. “Over the last two weeks, you’ve seen more timely hitting, fundamental defense and the pitching has been fine.”

The Padres got a pinch-hit home run from Logan Forsythe to tie it at 1 in the eighth before the winning rally one inning later.

“It’s going to be an exciting series,” said San Diego rookie catcher Yasmani Grandal, who got the rally going with a leadoff double. “They (were) leading the division and we are on a streak.”

Grandal didn’t even mention another story line that included him and both of the starting pitchers. Latos and San Diego’s Edinson Volquez were matched up for the first time since being part of the five-player trade between the clubs in the offseason.

The Padres’ rally ruined a sterling outing by Latos, who was nearly matched by Volquez for seven innings.

Latos did not allow a run on four hits over seven innings. He struck out eight walked two.

Volquez gave up just one run on five hits in seven innings. The right-hander struck out 10 while walking three to increase his major league-leading total to 63.

“There was a determination on both pitchers that might have been a little bit different than any other game,” Black said.

Said Reds manager Dusty Baker: “(Latos) came back here with a lot of emotions. He pitched a great game. It’s tough. You hate to have two hours erased in minutes.”

That’s what happened when Forsythe hit a leadoff homer in eighth off Sean Marshall.

“That just gave us a lot of momentum,” said Cameron Maybin, who was part of the ninth-inning rally. “Guys could just feel it.”

Forsythe’s homer, his first as a pinch hitter, carried into the second deck of the brick Western Metal Supply Co. building in left field.

Grandal hit a leadoff triple in the ninth against Logan Ondrusek (3-2), who then intentionally walked Alonso. Maybin followed with a bunt that bounced high in the air and left no play to load the bases.

The Reds brought in Sam LeCure and played the infield and outfield in. Cabrera then lifted a fly ball over the head of left fielder Chris Heisey that bounced once before hitting the wall.

All-Star Huston Street (2-0) pitched the ninth for the win.

For Grandal, it was another in a series of big hits in his first full week in the majors. The catcher has hit four homers in six games since being recalled from the minors Friday.

The Reds jumped ahead in the second after Jay Bruce led off with a walk and scored on Heisey’s one-out triple.

San Diego advanced only one runner to third base against Latos. That came after Alonso’s double with one out. Maybin then hit a slow roller to second baseman Brandon Phillips. Maybin slid head-first into the bag and TV replays clearly showed he was safe.

But first-base umpire Brian Knight called Maybin out, prompting Black to argue the call. Black was ejected by Knight.

With Alonso at third, Latos struck out Cabrera.

Volquez, who came in with the second-lowest run support in the majors at 2.69 runs, has allowed just one run in each of his last three starts while giving up only 11 hits and striking out 30 over that span.

Notes: Latos lost the chance to become the first Reds pitcher since Jose Rijo in 1990 to throw three straight complete games in the same season. … Volquez threw a career-high 127 pitches. … In Latos’ first three major league seasons with San Diego from 2009-11, Latos went 27-29 with a 3.37 ERA in 72 starts. … Over four seasons with Cincinnati from 2008-11, Volquez was 30-18 with a 4.17 ERA in 74 games, including 73 starts. … Reds 3B Scott Rolen was out of the starting lineup for the fourth straight game with back spasms. … NBA Hall of Famer and San Diego native Bill Walton threw out the first pitch — or pitches. Walton threw two pitches into the dirt before he finally threw a strike to Padres pitcher Clayton Richard. … The Padres will honor longtime bullpen catcher Darrel Akerfelds for the remainder of the season by hanging his No. 48 jersey on the inside of bullpen fence in center field. Akerfelds died of pancreatic cancer on June 24. … Reds RHP Bronson Arroyo (3-5, 4.06) will face Padres RHP Kip Wells (1-1, 1.50) on Saturday night