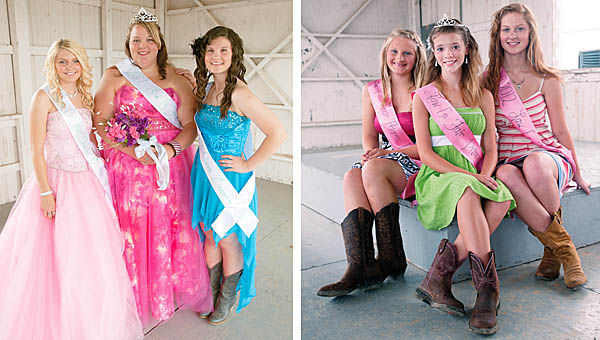 Shawna was crowned at Monday’s opening ceremonies at the fairgrounds grandstand stage. She is the daughter of Shawn and Dora Myers and is a freshman at Penn Foster College. She is a member of the Arabia All Stars 4-H Club. In 2006 Shawna served as Fair Princess.

“I am really excited,” Shawna said about serving as fair queen.

Serving as Fair Princess this year will be Kimberly Schmidt, an eighth grader at Dawson-Bryant School.

“I feel pretty good about it,” Kimberly said. “I was in shock (when they announced her win) and I thought ‘Oh thank you.’”

Kimberly is the daughter of Jackie Schmidt and the late Charlie Schmidt.

At the opening ceremony the family of the late Paul Herrell, two-time county commissioner who died earlier this year, was given plaques in honor of the commissioner. This fair is dedicated to Herrell and all American veterans.

“Paul did a lot for the fair and Lawrence County,” Fair Board President Jim Gore told the audience.

Also both the Democratic and Republican parties presented checks of $1,000 to the 4-H organization.

ROME TOWNSHIP — It is probably the only place in the county where an apple pie can go for $175.... read more