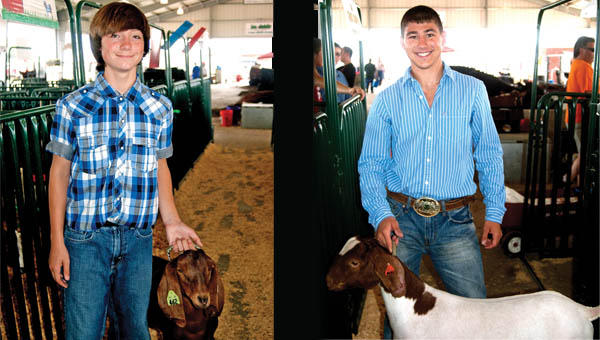 ROME TOWNSHIP — A veteran competitor and a newcomer to the arena took top honors at Tuesday’s goat showmanship competition at the Lawrence County Fair.

Junior winner Heath Wade said he didn’t know quite what to expect as a first-time competitor.

The 14-year-old from Wolf Creek said he bought his goat at an auction when it was a baby.

“I walked it everyday,” Wade said.

Despite his goat suffering a leg injury when it was younger, Wade said he was lucky to have such a tame goat to work with.

To prepare for Friday’s junior showman of showmen contest, Wade said he would continue to train.

Senior winner Scott Dial, 18, has already had some time in the spotlight this week.

The Scottown native won grand champion for his goat Monday and took first in Saturday’s skill-a-thon for goats.

“I’ve won all three things you can win with goats this year.”

Dial, who has competed with goats since he was 11 years old, said he was raised on a goat farm and enjoys working with the animals.

“I just like them,” Dial said. “I love competing with them and showing them. It paid off sticking with it.”

Both Dial and Wade will face-off in their respective classes for the senior and junior showman of showmen contest Friday.