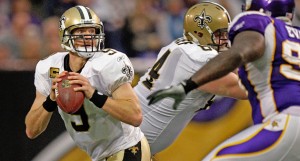 Quarterback Drew Brees and the New Orleans Saints are reportedly as much as $10 million apart on a new contract. (MCT Direct Photo)

NEW ORLEANS (AP) — Drew Brees and the New Orleans Saints still must close a significant gap in guaranteed money if they are to agree on a five-year contract worth about $100 million by Monday’s looming deadline for a long-term deal, said a person familiar with the negotiations.

The sides were more than $10 million apart in the guaranteed portion of the contract on Wednesday, the person told The Associated Press on condition of anonymity because talks the talks are ongoing.

The stakes are high for both sides and the negotiations have lasted for months, including long gaps in communication between the two camps.

Brees, who is 33 and entering his 12th season, has never before had the chance to negotiate a contract on par with the elite quarterbacks of the game. The Saints, meanwhile, risk alienating the best quarterback in franchise history, not to mention their fan base, by failing to make an offer to his satisfaction by Monday — the deadline for players with the franchise tag to sign long-term deals.

Several months ago, Brees first raised the possibility that he would not report to the opening of training camp if all that was on the table at that time was the one-year franchise tag of about $16.3 million. People familiar with the quarterback’s plans say that remains the case.

Brees has said he does not want to play under a one-year contract with no long-term security in the coming seasons. He did it once before, with costly consequences, when he played under the franchise tag for San Diego in 2005 and wound up with a career-threatening injury to his throwing shoulder.

That injury led him to accept a six-year, $60 million deal with New Orleans in 2006, which left him playing for well below market value in the past few seasons, even as he was setting club and league records.

Brees had hoped that an extension would be done before 2011, but when it was not, he decided not to hold out and played without the security of a long-term contract. He remained healthy the entire season and passed for an NFL single-season record 5,476 yards. Brees considered that an act of faith in the Saints, and now he is insistent that that faith be returned in the form of a contract that not only give him the highest average annual salary in the game, but also guarantee a significant portion of his salary.

Mickey Loomis has said he understands that Brees’ contract is the most important deal on which he has worked in his career. However, he has stressed that such a rich deal, with the potential to affect the team’s ability to sign other players, must be entered into with caution.

Both sides have offered proposals that would give the Saints more flexibility under the NFL’s salary cap than New Orleans would have if Brees played for the franchise tag the club has placed on him.

In those proposals, a relatively low base salary number in the early years would be offset by guaranteed signing bonuses that are pro-rated, for salary cap purposes, over the life of the contract.

The current salary cap is about $120 million, but could rise substantially under a new NFL TV deal that will begin in 2014. Under the league’s current labor agreement, players are supposed to receive about 55 percent of TV revenues.

If the two sides can narrow their differences on the guarantees, the remaining portions of the contract should be easier to figure out.

The two sides are working from a framework of five years. The difference in the annual average pay is about $1.25 million, with the Saints last offer at about $19.25 million and Brees’ last proposal at about $20.5 million.

However, it is not yet clear how much Brees is willing to come down from a $20.5 million annual figure that some in his camp have argued is low, past on past trends.

Peyton Manning recently signed a five-year, $96 million deal, which averages $19.2 million. Manning is three years older than Brees and did not play last season because of neck surgery.

Meanwhile, teams have had a history of offering new contracts to elite players which represent annual multimillion dollar increases over the previous top contract for a player at that position. Detroit receiver Calvin Johnson’s last contract averages $16.2 million a year, which exceeds Larry Fitzgerald’s pay by more than $1 million per year.

Even major contracts can be negotiated quickly under deadline pressure, and the types of differences the Saints and Brees have can be resolved in less than a day, so there remains plenty of time to work out a deal.

However, if the deadline passes without a long term contract, Brees could still hold out for a one-year contract worth more than the current franchise tag. Brees could also hold out until the Saints put it in writing that they will not use the franchise tag on him again next season, allowing him to test the open market.

Kerns still among Ohio Am leaders