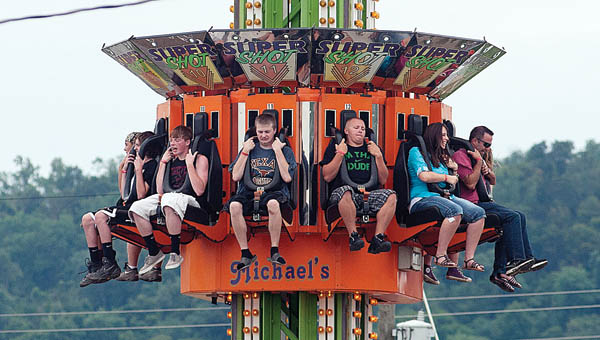 Fairgoers produce looks of worry as they ride the Super Shot during the 2012 Lawrence County Fair.

ROME TOWNSHIP — The 2012 edition of the Lawrence County Junior Fair is now a happy memory for 4-H club members but for the fair board and other county leaders, the end of this fair is an opportunity to assess what can be done to make future fairs better.

“We had a great fair,” fair board member Randy Lambert said. “I think the weather may have hurt the attendance but everyone likes the barn. We have some changes to make, some tweaking.”

Lambert said the next item on the agenda is to finish the livestock barn and arena that were used but not quite complete when the fair began earlier this month.

Lambert said there are also plans to replace eventually the grandstand. He said he had no estimates on what that would cost.

During the past year several groups have stepped forward with donations for the fair barn. Parts of the new barn and arena were named for those groups based on their pledges. The show arena itself was named for Premier Management, which has pledged $100,000 over the next five years to the barn construction project. The steer pens were named for Lambert and Lawrence County Commissioner Freddie Hayes Jr., who each pledged $30,000 over the next five years. The swine barn was named for Cooke’s Farm Center, which pledged $60,000. Bob Clyse Chevrolet-Buick-GMC donated the money for other animal pens. Still other area businesses have donated other goods or services to the fair. Rolo Construction, Sand and Gravel, Inc., donated mulch for the arena.

Lambert said the fair board needs another $100,000 to complete the project.

Lawrence County Extension Director Treva Williams said from her perspective, the fair and all its exhibits, competitions and 4-H activities was a success for another year.

“I think it’s gone fairly smoothly,” Williams said. “There were lots of changes with the new building but overall I think it’s worked out.”

Williams said one group of people in particular deserve the gratitude of all fairgoers for the success of the fair: Each year volunteers step forward to make sure whatever needs to be done gets done.

“We couldn’t do it without our volunteers,” Williams said as she watched two volunteers carry a large pot of flowers and them into place at the livestock arena just before the start of the Saturday livestock auction. “This couldn’t happen without them.”

Cincinnati third baseman Scott Rolen had a two-run single in the eighth inning that gave the Reds a 4-2 win... read more