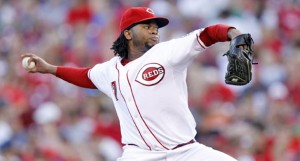 Cincinnati starting pitcher Johnny Cueto remained unbeaten against Arizona as he won his 11th game on Tuesday and the Reds beat the Diamondbacks 4-0. (Courtesy of The Cincinnati Reds)

CINCINNATI — Johnny Cueto felt the blister and the heat. Neither one was all that much of a problem.

Cueto showed no significant issues from his finger blister during six innings Tuesday night, and Ryan Ludwick hit a three-run homer that sent the Cincinnati Reds to their first victory without Joey Votto, 4-0 over the Arizona Diamondbacks.

Votto had surgery earlier in the day to repair torn cartilage in his left knee, sidelining the former National League MVP for up to a month.

“It was a struggle, a battle,” manager Dusty Baker said. “We’re going to have quite a few battle-type games without Joey on the offense.”

Cueto (11-5) threw 105 pitches, an indication that a blister he developed on his right index finger last week wasn’t bothering him too much. He gave up four hits and walked four.

“It was better,” Cueto said, with an athletic trainer serving as translator. “I felt it a little bit, though.”

Aroldis Chapman came on with two aboard and two outs in the ninth and fanned Aaron Hill on four fastballs — the last one 101 mph — for his 14th save in 18 chances. Chapman has gotten 21 of his last 25 outs off strikeouts.

Arizona’s Trevor Bauer (1-2), the first of the 2011 amateur draft picks to reach the majors, had the roughest time in his four starts so far. The 21-year-old pitcher lasted only three innings, gave up four runs, walked five, threw two wild pitches and had an errant pickoff throw.

“It’s pretty obvious — I couldn’t throw a strike when I wanted to,” Bauer said. “You put five guys on base and you’re going to get beat.”

Diamondbacks manager Kirk Gibson revamped his lineup for the series opener, looking to get his hitters out of a collective slump. It worked — 13 hits in a 5-3 win over the Reds on Monday night.

He kept the same top five hitters in the batting order, but got different results with Cueto on the mound.

Cueto had his start pushed back two days after he developed a blister while throwing in the bullpen. The Reds were concerned that he might not get very deep into the game and called up Todd Redmond to have another pitcher available in the bullpen, just in case.

Cueto wore long sleeves on a humid, 96-degree evening and was crisp at the outset. His control faded in the middle innings, but was still good enough to get him out of bases-loaded, two-out threats in both the fifth and sixth innings.

“It was hot today, but I didn’t feel it too much,” Cueto said. “My legs were feeling strong. I’ve been running a lot.”

Baker attributed his control problems in part to the long layoff between starts because of the blister.

“And the finger bothered him some,” Baker said. “It didn’t open up to bleed, but the skin came off of it a little bit. He got out of trouble, and that’s the mark of a good pitcher. He can dial it up when he wants to and needs to, and he did.”

The Reds scored an unearned run in the first inning with Bauer’s help. Drew Stubbs walked, Zack Cozart reached on shortstop Stephen Drew’s error, and the runners pulled off a double steal. Stubbs scored when Bauer threw a wild pitch that bounced in front of the plate — one of several that didn’t make it nearly far enough.

The bad moments were just beginning for the rookie.

He walked two more in the third and threw wildly on a pickoff throw. He knocked Ludwick on his back with an up-and-in first pitch.

“I almost did a reverse Chapman,” Ludwick said, referring to the closer’s two forward somersaults after a save earlier this season.

Ludwick hit the next pitch into the upper deck in left field for a 4-0 lead, extending Great American Ball Park’s streak to 70 straight games with a homer.

It’s the longest such streak since Coors Field had 80 consecutive games with a homer from 2002-03.

NOTES: OF Jason Kubel was out of the lineup for the fourth straight game because of a sore hamstring. Gibson said he could return on Wednesday. … Reds SS Zack Cozart snapped an 0-for-16 skid. … Slumping RF Jay Bruce got a day of rest. … RHP Mat Latos will try to extend his streak of 15 starts without a loss on Wednesday. Latos hasn’t lost a game since April 18. … RHP Mike Leake pinch hit for Cueto in the sixth and struck out.

CINCINNATI (AP) — The Reds are still trying to figure out how to cope with the loss of first baseman... read more