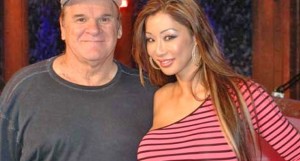 Pete Rose is on deck for his own reality television show.

Entertainment Weekly reports (http://goo.gl/zYgBh ) that TLC is working on a show following Rose and his wife, model Kiana Kim who did a Playboy shoot in 2010.

The 71-year-old Rose is banned from baseball for betting on games when he was the manager for the Cincinnati Reds. The ban has left him ineligible to be inducted into the Hall of Fame.

Rose says to Entertainment Weekly: “It’s not going to be classless — like it seems like a lot of reality shows aren’t really reality, but our reality show is going to be funny, entertaining, and real.”