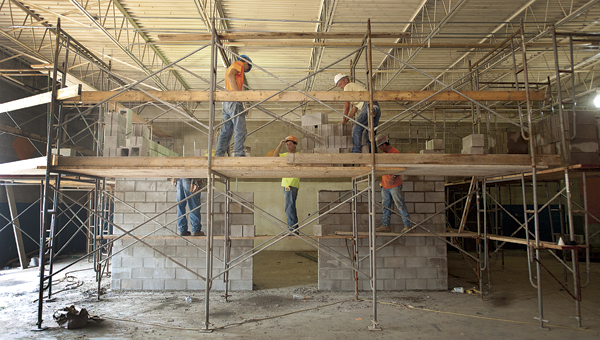 Workers are on site at Collins Career Center as a major renovation is going on at at the school.

CHESAPEAKE — When students return to the Collins Career Center campus this fall, they will be in for some major changes.

The 11,000 square-foot expansion of the campus has been ongoing since about the middle of May and will continue through the next two years in two phases, but Superintendent Steve Dodgion said the project will not interfere with classes.

“This is not going to at all affect the educational process this fall,” Dodgion said.

The $22 million project will bring the facility into compliance with Ohio School Facilities Commission requirements and also modernize and repair outdated and damaged sections of the campus.

During the current phase of construction, work is being done both in the front interior of the building and on the exterior grounds of the campus.

For this to work, the CCC adult education classes have been moved to the former South Point High School until construction is finished. The first phase is expected to last about a year, Dodgion said.

According to the superintendent, the project is on track and running smoothly.

Joe Romanello Construction manager for Hill International, said on Thursday the final grade was being put down for a new parking area and a new drive at the front of the campus. He said asphalt would be spread next week.

The new drive will take school buses around the administration building so students can unload in the front, rather than the back of the building.

The wooden walkway, which led to the main entrance of the Tom Hesson Building, has been removed and the ground cleared.

Dodgion said new offices would be built in that space. The former offices inside the main entrance would be converted into two classrooms. Two more classrooms will be built near the cafeteria and lab classrooms, for a total of four new rooms.

The space that was formerly the campus restaurant will be converted to a media area with computers and Internet access for students as well as the community when school is not in session. Behind the media center will be a newly remodeled special education center.

The restaurant will be moved to the rear of the campus during the second phase and Dodgion said a new culinary program will be implemented.

The school’s cafeteria is walled off, but will be fully functional when school starts, Dodgion said. The cafeteria will be upgraded with new equipment and a stage during the second phase of construction.

The lab rooms, such as cosmetology and welding, will open to students by Sept. 27. The labs are currently being renovated to add updated equipment and, like the rest of the building, add new lights, ductwork, floors, walls and paint.

“We’ve got way more students than our space was meant for,” Dodgion said.

Dodgion also said a 7,000-square-foot multi-purpose building will be built and used for high school classes during the construction project and adult education classes after construction is complete.

Once the entire project is complete, temporary classrooms at the rear of the facility will be removed.

“These guys are working hard,” Dodgion said. “I am confident this will work out just great for us.”

For anyone needing to visit the campus to speak to office staff, the offices have been moved to the rear of the facility in the adult education wing.