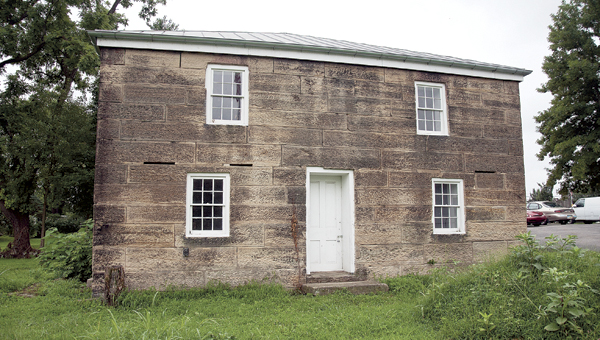 Members of the Burlington Jail Committee are looking for funding to help with the restoration project of the former Burlington Jail located off County Road 1. Plans for the old jail include converting it into a museum of Lawrence County history and a possible community meeting hall.

BURLINGTON — The newly re-formed Burlington Jail Committee is off and running in a renewed effort to restore the historic structure.

Last week at a meeting of countywide residents interested in the one-time Ohio Bicentennial project, an ad hoc committee was formed and charged with turning the jail into a museum and tourist site.

Chairing the committee is Ed Moellendick with Ann Wise as secretary and Robert Payne as treasurer. Also serving on the committee is Proctorville Councilman Dale Burcham and his wife, Betty; Don Saunders; Harriette Ramsey, president of the Concerned Citizens of Burlington, and her husband, Raymond; Fayette Township Trustee Mike Finley; Margaret Pennington, Bill and Mary Nance and Bernard Conwell.

The renovation was begun as a county commission project in 2003 as the county’s contribution to the Ohio Bicentennial celebration. But since then restoration efforts have lagged until the formation of the current committee.

The first focus will be restoring the second floor of the jail as closely to its original state as possible.

“We are trying to get a grant,” Ramsey said. “We have one bid in for the second floor and are wanting to get a couple more bids.”

Currently there is approximately $5,000 leftover from the decade-old restoration effort. Organizers estimate about $10,000 is needed to complete the second floor, plus cover incidental expenses.

“We have an elevator that came out of South Point Middle School and we have it stored at Cogan’s and are paying on that every month,” Ramsey said.

Besides using the museum as a repository of Lawrence County’s history, the second floor could also be used as a community meeting place, Ramsey said.

The limestone jail is the only structure on the one-time courthouse site at Burlington-Macedonia Road. It was built in 1846 after the first jail, a log building, was destroyed by a fire set by an inmate.

“Everybody was gung ho and enthusiastic about doing this,” Harriette Ramsey said.

Funding cuts cited   SOUTH POINT — An informal headquarters for community activities in the eastern end of the county... read more