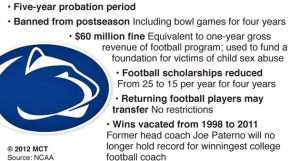 STATE COLLEGE, Pa. (AP) — A potential exodus of star athletes. No hope of playing in the postseason. More than a decade of accomplishments erased from the record books. And Joe Paterno’s legacy in shreds.

Penn State football, a longtime powerhouse that was once one of the cleanest, most admired programs in college sports, escaped the death penalty from the NCAA on Monday but was dealt a heavy blow that will cripple it for years to come.

The university agreed to an unprecedented $60 million fine, a four-year ban from postseason play and a cut in the number of scholarships it can award — the price it will pay for having looked the other way while Jerry Sandusky brought boys onto campus and molested them.

The NCAA also erased 14 years of victories, wiping out 111 of Paterno’s wins and stripping him of his standing as the most successful coach in the history of big-time college football.

Penn State meekly accepted its punishment, pledging to hold itself to high standards of honesty and integrity.

Penn State spokesman David La Torre said university President Rodney Erickson had no choice but to acquiesce, given the threat of a total shutdown of the football program.

“It was clear Penn State faced an alternative — a long-term death penalty and additional sanctions for the program, university and whole community. Given the situation, he believed the sanctions offered and accepted was the appropriate and course of action,” La Torre said.

At a student union on campus, several dozen alumni and students gasped, groaned and whistled as they watched Emmert’s news conference. The news was a crushing blow to many students.

Nicole Lord, a senior, questioned why Penn State’s student body, and especially its athletes, should be punished “for the wrongs of three men and a monster.”

Sandusky, a former member of Paterno’s coaching staff, was found guilty in June of sexually abusing 10 boys over 15 years, sometimes on campus. An investigation commissioned by the school and released July 12 found that Paterno, who died of lung cancer in January at age 85, and three other top officials at Penn State concealed accusations against Sandusky to shield the school from bad publicity.

The NCAA’s punishment was announced a day after the school took down a statue of Paterno that stood outside Beaver Stadium.

The sanctions will make it difficult for the Nittany Lions to compete at the sport’s highest level. Raising the specter of an exodus of athletes, the NCAA said current or incoming football players at Penn State are free to immediately transfer and compete at another school.

For a university that always claimed to hold itself to a higher standard — for decades, Paterno preached “success with honor” — Monday’s announcement completed a stunning fall from grace.

Paterno’s family said in a statement that the sanctions “defame the legacy and contributions of a great coach and educator.” Echoing the complaints of many outraged and heartbroken Penn State fans, the family also criticized university leaders for accepting the punishment without insisting on a full investigation and hearing on the school’s handling of the sexual abuse allegations against former coaching assistant Jerry Sandusky.

“This is not a fair or thoughtful action; it is a panicked response to the public’s understandable revulsion at what Sandusky did,” the family said.

Emmert said the penalties reflect “the magnitude of these terrible acts” and also “ensure that Penn State will rebuild an athletic culture that went horribly awry.”

He said the NCAA considered imposing the so-called death penalty, or a complete shutdown of the football program for a season or more, but worried about the collateral damage.

“Suspension of the football program would bring with it significant unintended harm to many who had nothing to do with this case,” Emmert said. “The sanctions we have crafted are more focused and impactful than that blanket penalty.”

Gov. Tom Corbett expressed gratitude that Penn State escaped the death penalty, saying it would have had a “severe detrimental impact on the citizens of State College, Centre County and the entire commonwealth of Pennsylvania.”

A drop-off in attendance and revenue could damage both the university, where the powerhouse football team is a moneymaker that subsidizes other sports, and the region as a whole, where Saturday afternoon football at Penn State is an important part of the economy.

But given Penn State’s famously ardent fans and generous benefactors, the precise economic impact on Penn State and Happy Valley, as the surrounding area is known, remains unclear.

First-year coach Bill O’Brien, who was hired to replace Paterno, will have the daunting task of trying to keep returning players from fleeing the program while luring new recruits.

“I knew when I accepted the position that there would be tough times ahead,” O’Brien said. “But I am committed for the long term to Penn State and our student athletes.”

But even before the sanctions were even announced, Ross Douglas, a defensive back from Avon, Ohio, backed off his commitment. Douglas told Rivals.com on Monday: “We prepared ourselves for it, and today was just the icing on the cake. I love Penn State to death, but I have to do what’s best for me, and I’m going to look elsewhere.”

Separately, the Big Ten announced that Penn State will not be allowed to share in the conference’s bowl revenue during the NCAA’s postseason ban, an estimated loss of about $13 million.

Emmert fast-tracked the penalties rather than go through the usual circuitous series of investigations and hearings.

The NCAA said the $60 million is equivalent to the annual gross revenue of the football program. The money will go toward outside programs devoted to preventing child sexual abuse or assisting victims.

By throwing out all Penn State victories from 1998 to 2011, the NCAA stripped Paterno of the top spot in the record book. The governing body went all the way back to 1998 because, according to the investigative report, that is the year Paterno and other Penn State officials first learned of an allegation against Sandusky.

Former Florida State coach Bobby Bowden will replace Paterno with 377 major-college victories, while Paterno will be credited with 298.

“I didn’t want it to happen like this,” Bowden said. “Wish I could have earned it, but that’s the way it is.”

The postseason ban is the longest handed out by the NCAA since it gave a four-year punishment to Indiana football in 1960.

“Our heritage, our legacy has been tainted and damaged,” said Troy Cromwell, a wide receiver on the 1986 team that won the second of Paterno’s two national championships. Cromwell said he felt bad for current and incoming players, “but at the end of the day, there were still those kids, those poor kids, and those victims, and we have to think about them first in everything that we do.”

Southern California, Ohio State and Alabama have all run afoul of the NCAA. Even Notre Dame went on probation for two years after a booster lavished gifts on players in the 1990s. The harshest penalty handed down to a football program came in the 1980s, when the NCAA shut down Southern Methodist University’s team for a year. SMU football has never gotten back to the level of success it had before getting the death penalty.

Jim Delany, commissioner of the Big Ten conference, said he believes Penn State is capable of bouncing back. “I do have a strong sense that many of the ingredients of success are still at Penn State and will be there in future years,” he said.

Craig Depkin II, a professor of economics at the University of North Carolina, Charlotte, noted the NCAA penalties won’t prevent Penn State — a school with a $4.3 billion annual budget — from spending the same amount on its football program in future years, or even more.

“There’s anecdotal evidence that you do see increases in funding after a ban,” Depkin said of other teams that have been sanctioned. “The idea (is) that you would spend more during times of crisis” to let players and fans know that the program isn’t going away.

Reds get offense in gear to beat Astros

HOUSTON (AP) — The Cincinnati Reds were happy to get a lopsided win after a string of close victories where... read more