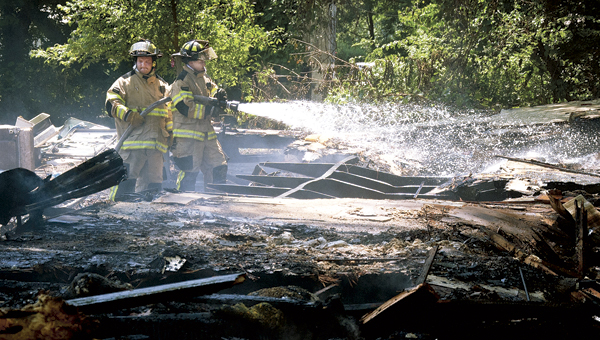 BURLINGTON — Darrell Costello watched Thursday afternoon as a fire finished a job he and his brother, Bob, had been working on for nine days: Demolish a vacant dilapidated mobile home on Burton Street.

The demolition crew had set a fire in front of the structure to burn wood from the building but the fire got out of hand.

“We were tearing it down so we could sell the lot and we were doing pretty good until the fire got underneath it,” Darrell Costello said.

The structure has been vacant for decades and had become an eyesore and a target for thieves.

Firefighters from South Point, Burlington – Fayette and Fayette fire departments battled the blaze in 90-plus degree heat as Lloyd Nelson watched from across the street. He had visited a friend in the neighborhood and had just finished picking apples.

“I looked up and saw the fire. I couldn’t get out,” he said, nodding toward the fire trucks and mass of water hoses.

The fire broke out at approximately 12:26 p.m. Wednesday.