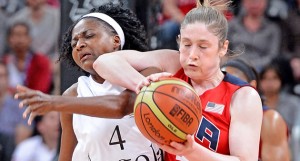 USA's Lindsay Whalen takes the ball away from Angola's Catarina Camufal during their game at the Basketball Arena at the Olympic Park during the 2012 Summer Olympic Games in London, England, Monday. (MCT Direct Photo)

LONDON (AP) — Five things to know about Monday, Day 3 of the London Olympics:

There was backstroke dominance for the United States and another impressive French performance during another wild night at the Olympic pool.

American teenager Missy Franklin won the women’s 100-meter backstroke before Matt Grevers led a 1-2 finish for the U.S. in the same men’s race.

Franklin, a 17-year-old from Colorado and best hope for the U.S. program in the post-Michael Phelps era, had a brief 13-minute break after taking the final qualifying spot in the 200 freestyle semifinals before she had to get back into the water for the backstroke final.

Australia’s Emily Seebohm, the top qualifier, led at the turn and was under world-record pace, but Franklin showed a remarkable finishing kick. With her arms twirling, the 6-foot-1 swimmer passed the Aussie in the final 25 meters and lunged toward the wall for a winning time of 58.33 seconds.

Grevers then produced another rally in the men’s 100 backstroke and Nick Thomas made it a 1-2 finish for the Americans, touching for silver in 52.92.

The twin backstroke victories made up for a disappointing performance by U.S. star Ryan Lochte, who faded to fourth in the loaded 200 freestyle — won by France’s Yannick Agnel.

The towering Agnel was in front throughout in perhaps the most star-studded race of these games — even without Michael Phelps, who passed up a chance to defend his Olympic title.

Fifteen-year-old Ruta Meilutyte of Lithuania got the win in the 100 breaststroke, holding off a late charge from world champion Rebecca Soni of the United States.

The Chinese won their second straight Olympic title in gymnastics and third in four games after a dismal performance in qualifying.

China’s score of 275.997 points was more than four points better than Japan, which needed help from a replay to finish second.

Britain initially was announced as the silver medalist, setting off raucous celebrations at the O2 Arena, Princes William and Harry included. The British don’t have a proud history in gymnastics, and this was their first men’s team medal in a century.

But Japan questioned the score of three-time world champion Kohei Uchimura on pommel horse, the very last routine. While judges huddled around a video screen, the British partied and Uchimura and his teammates sat stone-faced against a wall.

About five minutes later, Uchimura’s score was revised, with judges giving him seven-tenths more credit for his dismount. Instead of 13.466, he scored 14.166 — enough to move Japan from fourth to second with a total of 271.952. Britain was bumped down to bronze.

There was a familiar sister act at Wimbledon on Monday, with Serena and Venus Williams each advancing in the singles tournament, then combining for a doubles win.

Venus Williams waited an extra day because of rain to begin her bid for a record fourth gold medal in Olympic tennis, then defeated recent French Open runner-up Sara Errani of Italy 6-3, 6-1. Serena completed a July sweep of Poland’s Radwanska sisters by beating Urszula in the second round, 6-2, 6-3. She defeated Radwanska’s sister, Agnieszka, in the Wimbledon final this month. Federer also reached the third round, beating Julien Benneteau of France 6-2, 6-2.

“What a good day for fans between me, Venus, Roger and all the other players,” Serena Williams said. “It’s really such a great experience.”

Also Monday, Switzerland stripped a soccer player of his Olympic accreditation after he sent a threatening and racist message on Twitter about South Koreans. The comments by Michel Morganella came hours after the Swiss lost to South Korea, 2-1, on Sunday.

The 23-year-old player said in the tweet that South Koreans “can go burn” and referred to them as a “bunch of mongoloids.”

Swiss Olympic team chief Gian Gilli said via a translator at a news conference that Morganella “discriminated against, insulted and violated the dignity of the South Korea football team as well as the South Korean people.

Morganella later released a contrite statement through the Swiss Olympic team: “I am sincerely sorry for the people of South Korea, for the players, but equally for the Swiss delegation and Swiss football in general. It’s clear that I’m accepting the consequences.”

Morganella is the second athlete kicked off an Olympic team in London for offensive Twitter comments. Last week, triple jumper Voula Papachristou was kicked off Greece’s Olympic team for her comments on Twitter mocking African immigrants and expressing support for a far-right political party.

A Colombian soccer player was suspended for two games after U.S. forward Abby Wambach said she was “sucker-punched” in the right eye by Lady Andrade during the 3-0 win by the U.S. on Saturday. Wambach called for FIFA to take action, while Andrade called it “an accident.”

FIFA says its disciplinary committee suspended Andrade for a group match Tuesday against France and for the quarterfinals if Colombia advances.

The rest of the Olympic action Monday:

Candace Parker and the U.S. women’s team are 2 for 2 in London, and this one was a laugher.

Parker had 14 points and 12 rebounds to help the United States to a 90-38 rout against Angola.

The Americans (2-0) have won their last 35 games in the Olympics and four consecutive gold medals while Angola is looking for its first victory.

France had the most surprising win of the day, edging Australia 74-70 in overtime. Emilie Gomis scored all 22 of her points after halftime.

Belinda Snell connected from just past half court at the end of regulation, giving Australia a chance. But the Aussies had to play the extra session without stars Lauren Jackson and Liz Cambage — both had fouled out.

China, Turkey, Russia and Canada also won on the women’s side.

Light heavyweight Damien Hooper rallied from a third-round deficit for a 13-11 victory over Marcus Browne, handing the U.S. team its first loss in London after a 4-0 start.

Hooper and Browne put on perhaps the best three minutes of the day after both fighters cautiously fought the first two rounds. The Australian raised his aggression in the third to overwhelm Browne, a Staten Island, N.Y., product.

The U.S. women’s team beat Brazil in an early rematch of the Beijing Games final.

Sheilla Castro had 15 points for No. 2 Brazil, which was energized after a third-set victory but lost on Logan Tom’s floater in the fourth set.

The American women have never won an Olympic gold medal in volleyball.

It was May-Treanor’s 35th birthday when the match started, but because of TV schedules and a long match earlier in the session, it ended shortly after midnight Tuesday.

Jake Gibb and Sean Rosenthal lost to Poland in pool play, the first setback for the American men or women in beach volleyball at the games.

Princes William and Harry watched her from the main equestrian arena, joined by William’s wife, Kate, and Camilla, the wife of Prince Charles. Seated alongside them were Princess Beatrice and Princess Eugenie, the daughters of Prince Andrew.

Several of the riders who fell wore protective vests that inflated much like airbags upon impact. One of them, Hawley Bennett-Awad of Canada, was in the hospital under observation for a concussion and fracture to a bone at the base of the spine. There were no other serious injuries reported among the other fallen riders or horses.

This was quite the Olympic debut for Maggie Steffens, who scored seven goals to lead the U.S. women’s team to a 14-13 victory over Hungary.

Despite a team full of veterans, it was the 19-year-old Steffens who led the way with sharp shooting from outside for the Americans, who are looking to win their first gold in the event.

Cao Yuan and Zhang Yanquan totaled 486.78 points in the men’s 10-meter synchronized platform, giving the country its second gold medal in the sport at the games.

German Sanchez and Ivan Garcia of Mexico had the highest degree of difficulty in the competition and it paid off with the silver.

Nick McCrory and David Boudia of the U.S. took the bronze with 463.47. The Americans are 2 for 2 after Abby Johnston and Kelci Bryant earned a silver in 3-meter synchro springboard Sunday, ending a 12-year medal drought.

Britain’s Tom Daley and Peter Waterfield led through the first three rounds, but botched their fourth dive and finished fourth.

The event was overshadowed by an hour-long delay following an appeal by the South Korean team after Heidemann’s 6-5 victory over Shin A-lam in the semifinals.

South Korean officials argued the match was already over when Heidemann scored the winning point in the last second, but the jury finally upheld its decision.

Danish sailor Jonas Hoegh-Christensen is proving to be much more than a one-day wonder in the Finn class in the Olympic regatta.

He’s beaten British star Ben Ainslie in each of the first four races and remained in first place overall on Weymouth Bay on the English Channel.

The 49er skiffs, the fastest boats in the Olympics, made their colorful regatta debut.

Denmark’s Allan Norregaard and Peter Lang were in first place with six points after the first two of 15 races.

Top-seeded Lee Chong Wei returned from an injury break to squeak into the last 16 of the Olympic tourney.

Defending champion Lin Dan of China eased through his opener against Scott Evans of Ireland 21-8, 21-14. For the women, world champion Wang Yihan and No. 2-seeded Wang Xin also advanced with ease.

In the women’s K1 singles, Maialen Chourraut topped the qualifying in 98.75. Britain’s Lizzie Neave was second, only 0.17 behind.

Australia was strong in the men’s four at the rowing regatta, setting one of two Olympic-best times on a sunny final day of heat racing.

Britain, which has won this event at the last three games and is also the world champion, won the second heat and United States took the third heat.

Earlier, Britain’s Katherine Grainger’s quest for an elusive Olympic gold got off to a perfect start when she broke the Olympic best in the women’s double sculls with partner Anna Watkins in the first heat.

China, the 2008 Olympic champion, squeezed through to the final of the women’s quadruple sculls by finishing as the last of the four qualifiers in a six-boat repechage.

Defending Olympic champion Germany got off to a slow start but recovered in time to post a 2-1 victory against Belgium.

Russia and Brazil in Group A and South Korea in Group B lead the women’s handball competition after two rounds with two wins apiece.

Title favorite Russia routed Britain 37-16 in the host’s second drubbing of the tournament after its 31-19 defeat in Saturday’s opener against Montenegro.

Kaori Matsumoto of Japan won the gold in the women’s judo 57-kilogram division, and Mansur Isaev of Russia took the top spot in the men’s 73-kilogram category.

It was Japan’s first gold in London in the martial art it invented.

The women’s 57K bronze medals were won by American Marti Malloy and Automne Pavia of France.

China’s men and women are on track to sweep the gold medals in Olympic table tennis singles.

Defending world champion Zhang Jike and teammate Wang Hao, the silver medalist at the last two Olympics, reached the men’s quarterfinals Monday. For the women, top seeds Ding Ning and Li Xiaoxia are in position for a scrap over the gold medal.