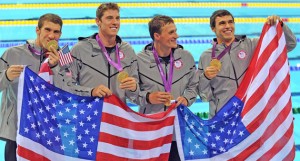 LONDON (AP) — Five things to know about Tuesday, Day 4 of the London Olympics:

Michael Phelps’ first gold medal of the London Olympics was one special prize.

The American swimming star broke the Olympic medals record as the United States romped to a dominating win in 4×200-meter freestyle relay.

With 19 career medals spanning three Olympics, Phelps moved one ahead of Soviet gymnast Larisa Latynina, who got her haul in 1956, 1960 and 1964. He helped the relay team to the victory after settling for silver when he glided at the end of the 200 butterfly earlier Tuesday.

Phelps now has 15 golds, two silvers and two bronzes. He still has three more events in London before he retires.

“It has been a pretty amazing career,” the 27-year-old Phelps said, “but we still have a couple races to go.”

The U.S. women’s gymnastics team also had a big day. Jordyn Wieber kicked it off with a tremendous vault and Aly Raisman closed it out with a solid floor exercise.

Team USA routed silver medalist Russia and everybody else on its way to its first Olympic title in women’s gymnastics since 1996. The U.S. score of 183.596 made its final event more like a coronation.

When the floor score for Raisman flashed, the Americans screamed and a chant of “U-S-A! U-S-A!” rang out around the arena. The women held up their index fingers for the cameras — just in case anyone had a doubt.

“We knew we could do it. We just had to pull out all the stops,” Raisman said.

Wieber went first and did perhaps the best one she’s ever done, getting great height in the air, her legs locked together. When her feet slammed into the mat on landing, she threw up her arms and smiled broadly. Anyone wondering how she was coping with the devastation of missing out on the all-around competition had their answer.

The U.S. men’s basketball team got off to a slow start against Tunisia, then took off when coach Mike Krzyzewski went to his reserves.

Carmelo Anthony and Kevin Love scored 16 points apiece to lead Team USA to a 110-63 victory. Kevin Durant added 13 and Anthony Davis had 12 for the Americans, who will face Nigeria on Thursday night.

Anthony, Love, Deron Williams, Russell Westbrook and Andre Iguodala opened the third quarter with a 21-3 run, turning a surprisingly close 13-point lead into a 67-36 bulge before any of the more celebrated starters finally got to play in the second half.

Also Tuesday, a female judo fighter from Saudi Arabia was cleared to wear a form of headscarf in the Olympics after a compromise was reached that respects the “cultural sensitivity” of the Muslim kingdom.

Judo officials had said they would not let Wojdan Ali Seraj Abdulrahim Shahrkhani compete in a headscarf because it was against the principles of the sport and raised safety concerns. But an agreement was reached after several days of IOC-brokered talks between the International Judo Federation and the Saudi Olympic Committee, allowing her to compete Friday in the heavyweight division.

“They have a solution that works for both parties, all parties involved,” International Olympic Committee spokesman Mark Adams said. “The athlete will compete.”

Saudi Arabia, which had never sent female athletes to the Olympics before, brought its two first female Olympians to London on condition they adhere to the kingdom’s Islamic traditions, including wearing a headscarf.

Shahrkhani’s participation was thrown into doubt last week when judo officials said a headscarf could be dangerous because of chokeholds and aggressive grabbing techniques.

Without giving precise details, Adams said the headscarf agreement is in line with Asian judo rules and is “safety compliant but allows for cultural sensitivity.”

Olympic officials defended Chinese teen swimmer Ye Shiwen against whispers of doping after she won the 400-meter individual medley Saturday in world-record time — and she made her own statement by winning another gold medal in the 200 IM on Tuesday night.

The 16-year-old clocked 2:07.57 to shave 0.18 off her own mark set in Monday’s semifinal — good enough for an Olympic record and her second gold medal in London.

John Leonard, head of the American Swimming Coaches Association but not a member of the U.S. Olympic staff, was among those openly questioning Ye’s legitimacy. The Guardian newspaper quoted him as saying the last 100 of her 400 IM race “was reminiscent of some old East German swimmers.”

“We need to get real here,” the IOC’s Adams said. “These are the world’s best athletes competing at the very highest level. We’ve seen all sorts of records broken already all over the place.”

“It’s a big mistake,” Maglione said of Ye’s doubters. “The people that said this is crazy.”

He said FINA spends $1 million to drug-test the top 30 swimmers in the world two or three times a year and “swimming is absolutely clean.”

The rest of the Olympic action Tuesday:

Zara Phillips gave the royal family plenty to cheer about, helping team Britain to a second-place equestrian finish behind Germany. Princes William and Harry and William’s wife, Kate, were in the stands to watch their cousin as she competed in the show jumping final portion of Olympic eventing.

Phillips’ mother, Princess Anne, watched as well — then presented her daughter and the rest of the winners with their medals at the ceremony before horses and riders took a thunderous group victory lap around the Greenwich Park stadium.

Americans Todd Rogers and Phil Dalhausser rallied for a 19-21, 21-16, 15-13 victory against Spain and remain unbeaten in the preliminary round of the beach volleyball tournament.

The United States clinched first place in its group in women’s soccer with a 1-0 win over North Korea.

Abby Wambach scored in the 25th minute for her 141st international goal and third of the tournament. Wambach and Co. then celebrated by coercing goaltender Hope Solo to get on the ground and do “the worm.”

Host Britain also is perfect through three matches, blanking Brazil 1-0 to delight an electric crowd of 70,584 at Wembley Stadium. Kelly Smith had the only goal.

Andy Roddick spent less than an hour on the court during an emphatic loss to Novak Djokovic. Jo-Wilfried Tsonga needed a much longer run to advance against Milos Raonic.

Roddick lost 6-2, 6-1 to Djokovic in 54 minutes, leaving the 29-year-old American to fend off more questions about retirement.

The second-ranked Djokovic had 34 winners on Centre Court at the All England Club. Roddick had 12.

Tsonga of France moved on by winning the longest set in Olympic history. He beat Raonic of Canada 6-3, 3-6, 25-23. The final set lasted three hours and 257 points.

Andy Murray, Marcos Baghdatis and Kei Nishikori also won on the men’s side. Maria Sharapova and Venus Williams were among the winners in the women’s tournament.

Clay Stanley scored 16 points and the U.S. men’s team improved to 2-0 in preliminary pool play with a three-set victory over Germany.

Serbia, Bulgaria and Italy each won in four sets.

Ryan Bailey and Peter Varellas scored three goals apiece and the United States recovered from a slow start to beat Romania 10-8 in the men’s tournament.

The U.S., which took silver four years ago in Beijing, and gold medal-favorite Serbia are tied for the Group B lead with four points apiece after two matches. Serbia beat host Britain 21-7.

Montenegro, Croatia and Australia also won. Greece and Italy played to a 7-7 tie.

Shannon Taylor scored late in the first half and the U.S. upset Argentina 1-0 in women’s field hockey.

The Americans controlled long stretches of play against the No. 2-ranked team in the world, got some key saves from Amy Swensen and kept Argentine star Luciana Aymar largely silent throughout.

The U.S. got into the Olympics by stunning Argentina 4-2 in last year’s final at the Pan American Games.

Vincent Hancock is putting together quite the Olympic resume. The 23-year-old U.S. Army sergeant is a two-time champion in men’s skeet shooting after he successfully defended his crown with a score of 148 in London.

Hancock’s win gave the U.S. a skeet sweep after Kimberly Rhode won the women’s competition earlier this week. Anders Golding of Denmark grabbed the silver, and Qatar’s Nasser Al-Attiya won a shoot-off over Russia’s Valery Shomin for the bronze at the Royal Artillery Barracks.

Carlos Suarez was upset with the scoring after he dropped a 16-6 decision to Turkey’s Ferhat Pehlivan.

Five ringside judges decided the awkward Pehlivan — who probably slipped and fell to the canvas more than a dozen times during the bout — landed more scoring punches. Suarez, who is from Lima, Ohio but is fighting for his mother’s homeland of Trinidad and Tobago, called it “a horrible decision.”

Light flyweight Mark Barriga easily handled Italy’s Manuel Cappai in the opening bout for the only Filipino boxer in London, earning a 17-7 victory.

Hoegh-Christensen finished first and second in a pair of races for a 10-point lead over Ainslie after six races. Britain’s Ainslie had finishes of 4-3 as the 24-boat fleet sailed in winds that reached 17 knots.

Chen Ruolin and Wang Hao led China to its third diving gold in London, this one off the big tower in women’s 10-meter synchronized diving. China won going away with 368.40 points, and the country is nearly halfway to its goal of sweeping the eight diving events.

Alan Campbell of Britain qualified fastest for the semifinals of the men’s single sculls, providing another boost for the host nation at the Olympic regatta.

Campbell crossed in 6 minutes, 52.10 seconds in the first quarterfinal to beat the times of fellow winners Mahe Drysdale of New Zealand, Lassi Karonen of Sweden and Ondrej Synek, the pre-regatta favorite from the Czech Republic.

Defending Olympic champion France moved to the top of Group A in men’s handball after a 32-20 win over Argentina.

Left back Nikola Karabatic scored seven times for France, which has 76 goals in two matches, more than any other team in the tournament.

Iceland, Hungary, Sweden, Croatia and Denmark were the other winners.

Favorites Ding Ning and Li Xiaoxia each won to set up an all-Chinese final in women’s table tennis.

Defending world champion Ding, who enters Wednesday’s final as the one to beat, defeated Feng Tianwei of Singapore 4-2. Li will be a decided underdog after defeating Kasumi Ishikawa of Japan 4-1.

Tony Estanguet of France won the gold medal in the men’s canoe slalom. Sideris Tasiadis of Germany got the silver, and defending champion Michal Martikan of Slovakia was third. … Michael Jung on Sam led the German eventing team to its second consecutive Olympic gold — and then picked up the individual gold to boot with a combined score of 40.6 after incurring no penalties beyond his initial dressage score. … The gold medal for men’s individual foil went to Lei Sheng of China. … … Maiya Maneza won Kazakhstan’s second weightlifting gold in London and set an Olympic record in the women’s 63-kilogram category. … Slovenia’s Urska Zolnir (women’s 63kg) and South Korea’s Kim Jae-bum (men’s 81kg) each nabbed judo golds. … Taufik Hidayat of Indonesia edged Pablo Abian of Spain 22-20, 21-11, setting up a showdown of Olympic badminton champions against Lin Dan in the round of 16. … Second-seeded Kim Bubmin of South Korea survived a scare from Fiji’s Robert Elder to remain alive in the men’s individual archery competition.

The Associated Press   Baseball’s haves picked up more players from the have-nots at Tuesday’s trade deadline, when the Canadian... read more