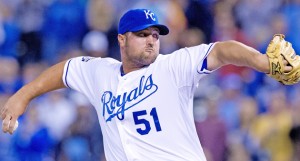 CINCINNATI (AP) — Unable to upgrade their everyday lineup, the Cincinnati Reds instead strengthened the back end of their bullpen on Tuesday by acquiring closer Jonathan Broxton from Kansas City for a pair of minor league pitchers.

Manager Dusty Baker plans to use Broxton as a set-up man for closer Aroldis Chapman, who has dominated while finishing games. Baker said Broxton could be used in save situations when Chapman has pitched several days in a row.

The Reds surged into the NL Central lead by winning 10 in a row before their 11-5 loss to San Diego on Monday night. They’ve pulled it off without first baseman Joey Votto, their top hitter. Votto is expected back in a few weeks.

“We had several deals for position players we looked at, and in the end, we just felt we liked what we had and the deals didn’t make sense for us,” general manager Walt Jocketty said. “So we decided to focus on pitching.

“We said, at the beginning, we were going to try to look for a leadoff hitter, cleanup hitter, bench help or strengthen our pitching, and the position player deals just weren’t right for us. We felt good about adding an arm like Broxton. We’re still going to look at things in August, deals that can be made.”

Broxton expected a trade, but was surprised to wind up with Cincinnati.

“I kind of seen it coming, but I didn’t see Cincinnati,” he said in Kansas City, where the Royals were getting ready to play Cleveland. “But they were real aggressive late is what (GM Dayton Moore) said — that everything that was going on was Texas, Texas, Texas. Cincinnati jumped right in the last second and got me.”

Broxton goes from a team last in the AL Central at 41-60 to one with the second-best record in the majors at 61-41. Cincinnati led Pittsburgh by three games at the time of the trade.

“I’m going somewhere where I’m picking up 20-25 games (in standings),” Broxton said. “I enjoyed my time here, but this is part of baseball, so go over there and hopefully we can win a division over there.”

Reds players sat in front of the bank of big-screen television sets in the clubhouse Tuesday watching news of the various trades, hoping they wouldn’t be involved in one of them.

“Especially with our team, I think everybody definitely wants to stay here,” left-handed reliever Bill Bray said, acknowledging he was a little nervous about his chances of being included in a deal.

The back of the bullpen has been the biggest challenge for Baker. Closer Ryan Madson tore a ligament in his elbow during spring training and had reconstructive surgery, leaving the Reds without a proven closer. Then, they lost their two top set-up relievers.

Bray was limited during spring training by a groin injury that landed him on the disabled list for nearly two months. He went back on the 15-day DL on Tuesday with a sore back. The Reds called up right-hander Todd Redmond from Triple-A Louisville to replace Bray.

Right-handed set-up man Nick Masset has been on the disabled list all season with a sore pitching shoulder. He’s not close to returning.

Baker eventually moved the hard-throwing Chapman into the closer’s role, and he has responded by converting 21 of 25 save chances, including his last 13 in a row. Broxton gives them another option for the eighth inning.

“It gives us another power arm in the bullpen,” Baker said. “You can always use more pitching. You never know what’s going to happen.”

Broxton missed most of the 2011 season with the Dodgers because of a bone spur in his elbow that required surgery. He agreed to a $4 million, one-year deal before this season with Kansas City, giving the Royals a steady setup man for closer Joakim Soria. He moved into the closer’s role when Soria needed reconstructive elbow surgery in March and has saved 23 games in 27 chances.

The Reds expect Broxton to arrive before a game against San Diego on Wednesday.

“He’s been very solid down there,” Yost said. “We’ll give him an opportunity to close games out. He was pretty obvious for me right now. He’s been pretty consistent and we feel his stuff is all the way back to where it was last year, when he was really successful.”

Reds beat Padres 7-6 to get back on winning track

CINCINNATI (AP) — The Reds ended their fabulous July with an unexpected trade and another win. The NL Central leaders... read more